I have already written a series of posts about this stay down at the Krishnamurti Study Centre in Hampshire - see for example the first one "Setting the scene" or the most recent (before this one) "Being, flow & 'pure driving'".  Yesterday I took an ‘idle & blessed’ day.  This is something I’ve done back at home in Edinburgh a few times … see, for example, the posts “A day spent 'idle & blessed': report of an experiment" and "A day spent 'idle & blessed': revisiting an experiment - savouring & 'positive state mindfulness'".  The title comes from Mary Oliver’s wonderful poem “The summer day”:

Who made the world?
Who made the swan, and the black bear?
Who made the grasshopper?
This grasshopper, I mean -
the one who has flung herself out of the grass,
the one who is eating sugar out of my hand,
who is moving her jaws back and forth instead of up and down -
who is gazing around with her enormous and complicated eyes.
Now she lifts her pale forearms and thoroughly washes her face.
Now she snaps her wings open, and floats away.
I don't know exactly what a prayer is.
I do know how to pay attention, how to fall down
into the grass, how to kneel down in the grass,
how to be idle and blessed, how to stroll through the fields,
which is what I have been doing all day.
Tell me, what else should I have done?
Doesn't everything die at last, and too soon?
Tell me, what is it you plan to do
with your one wild and precious life?

The basic format I use is to leave the house without any particularly clear plan and then to wander, not coming back for eight hours.  This is so vastly different from the way I lead most of my life, which is highly structured, active and task-orientated.  To wander, in the Japanese poet Basho's words "drawn like blown cloud” is a real change of gear, change of state, much more “being” than my usual highly focused “doing”.

So I left the Study Centre a little before 9.30am (and didn’t get back until a good bit after 5.30pm).  In & around Edinburgh I simply make decisions about which direction to take very much as the impulse takes me.  Down here, where I don’t know my way around and getting significantly lost was a real possibility, I took a map and made most of the decisions about direction planning fairly carefully … only throwing in the impulsive “I’ll just go this direction (rather than that)” every now and again.  It kept me fresher and on my toes. 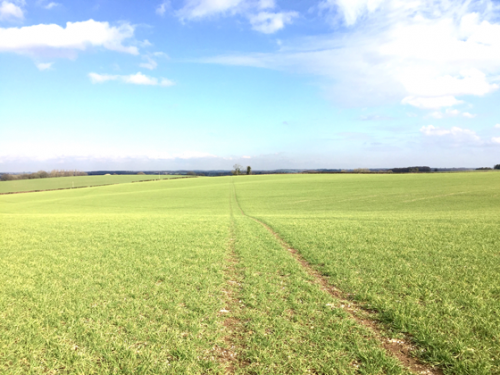 So I ended, ambling rather than striding out for much of the time, heading west to Hinton Ampner & Hinton Marsh, then down the Itchen Trail and Wayfarer’s Walk through the greening fields to the South Downs Way. Such an extraordinarily beautiful sunny day for February.  At one point I even wondered if I might get sunburnt.  Then on to Monarch’s Way … so many criss-crossing long distance paths in this part of the country.  From Warnford village to Hayden’s Farm and then along the old, now-unused, Meon Valley rail track, through West Meon and up onto the rise to the north.  I walked almost to the A272 before looping round with the sun low in the sky.  Close to Marldell Farm, up the road and across the fields to join the muddy bridleway through the woods.  Sun now so low it shone through the trees … me singing Dylan’s “It takes a lot to laugh, it takes a train to cry” with its lines about the sun, moon & trees.  Beautiful.

I had my phone with me and occasionally, earlier in the walk, I recorded a few thoughts, for example about “staying present”:

Sunny, beautiful, chilly morning … a bit like pilgrim’s progress coming to a path through tightly planted young … beech trees, just a real crowd of them … standing in the sunshine … noticing how very easy it is as I walk along to slide off into the meshwork of associative thoughts, memories … and wondering/comparing K’s suggestion “Just wake up. Just be aware of the whole thing and then you’re awake” … which is true.  And seeing how it feels if I do something that I’ve done off & on over the years, which is just to notice observing, saying silently to myself “Observing ... the squiggliness of the oak twigs; observing ... the deep shadow bars on the smooth, almost human beech tree trunk; observing ... sunlight on the lichen on the old dead tree.”  Then cycling through to hearing: “Hearing ... the chitter of the birds, the warbling; hearing ... the distant sound of traffic; (hearing) the amazing strange warble-chirping; hearing ... the sound of a cartridge going off probably in a bird-scarer in the distance.”  And coming back to the observing “Observing the line of trees, many of them draped in ivy; observing the sand-brown coloured stubble; observing the way the sunlight brings everything up more sharply; observing my own shadow, dark, dark against the sunlit grass.  Sensing almost a sleepiness with the warmth; sensing the amble-movement of my feet, walking down the slope of the path; sensing the slight crick-crack of my joint in the left foot; sensing my breathing like a sigh, it is a sigh, releasing.”  And wondering is this a kind of ‘brutal discipline’ (as Krishnamurti might put it with his dislike of any ‘formal’ meditation practices)?  I don’t think so.  It doesn’t feel like it.  It feels like a gentle taking by the hand, taking the awareness on the walk with me.  So if I don’t do that, and already I’m easier, more relaxed, having done so.  If I don’t do that and I walk, what happens?  So walking, exploring just being here, rather than ‘taking my hand’ to help me be here.  Just wake!  And staying in the flow when there’s little challenge … that often is more of a … a bigger ask.  Classically on the skills-challenge diagram, one would be sliding very easily into boredom.  And one of the obvious things is to increase the challenge, for example turning it into a deliberate meditation exercise.  Good or bad?  Csikszentmihalyi would probably say it was good; Krish might say it was bad.  Krish was somewhat unusual.  Even before he was taken on board by the Madras Theosophists, it was reported that he could just get immersed in observing a plant or an insect.

There are clearly intermediate phases as well, so there’s the possibility of doing that exercise but not actually verbalising “observing … “ or “hearing … “, simply noting sequentially.  And then I guess there’s the possibility of just noting without making it any kind of formal sequence of “seeing; hearing; seeing; feeling (or sensing)”.  And this is all likely to be easier for me at the moment because I am on day five of this stay here at Krishnamurti’s.  And you could say the same for a meditation retreat, only even more so.  Mm … and dear Krish was a bit of a freak actually.  I’m not sure that I necessarily do think that sauce for the goose is sauce for the gander here.  He was extremely unusual. … So experimenting not just with “observing, hearing, sensing” but experimenting, taking that old statement “Lose your head and come to your senses” even a step further and exploring allowing the sense of self to evaporate.  Allowing a feeling of softening, as if my boundaries can melt away.  And there’s a feeling too, almost as if the ego, the self … not ‘almost as if’; it does I think permeate the body in terms of facial expression, how the body is held, the overall posture, the tension in the muscles.  And I think there is an option as well, helpful as I walk along, to not so much force myself to do anything as to just notice and to go “I don’t have to be holding onto this muscle activity, just as I don’t have to hold onto a sense-of-self.  I can let this go.  I can let this soften.  I can become more clear, transparent, connected.”  Remember Krish’s comment about how he went to the dentist and didn’t have a thought for four hours.  As he said, maybe he got picked/selected by the Theosophists because of his ‘vacancy’.  And remember associative thinking is not all bad (see, for example, Michael Corballis's recent book 'The wandering mind: what the brain does when you're not looking')  There is, for example, the wandering mind research on increased creativity.  And why is the wandering mind the default state?  I would have thought that hunter-gatherers presumably found that of some advantage. Very interesting.  Krish would probably say that he’s not “putting a wall round it (the mind) in the same way” (as people do when they practise techniques to facilitate staying in the present).  But again I would suggest he’s a bit of a freak!

Anything else to say? … it’s beautiful, it’s beautiful ... and still after five days (and I’m a pretty stable, non-anxious, non-ruminating guy), my mind just wanders very easily.  Much less than it would have done.  I could have gone on this walk at home and, to some extent, hardly noticed it.  It’s a wonderful day.  Quite a nice image of taking the attention on a walk a bit like leading a horse.  And some of the time you can just lead it and it walks with you.  Sometimes you need to give a little twitch on the reins.  Sometimes you need to be quite firm for a while … and some days the horse is a bit more misbehaved than others!”

The next post in this sequence is "Personal retreat: seventh reflection - life tide returning".