Last September I went back to Cambridge for a reunion ... the first time I'd ever been back to school or university for such a thing.  It was an experiment in "emotional archaeology" and I wrote a series of blog posts about it.  At one stage I experimented with a dialogue between the 22 year old and the current 62 year old versions of me.  In the post "Going back for a university reunion: self-esteem, hallucinogens, wonder & the transpersonal", I wrote "I changed subject too from philosophy to medicine (in 1970).   Life speeded up and gradually I see now that so much of that wonder, that waking to be "blessed", so much of that has ebbed away in the course of what has in many other ways been a life that I have felt immensely grateful for.  And in the acted out dialogue between my younger and my current self, that's what emerged. A reminder of what I had forgotten."  In the last post of the sequence - "Going back for a university reunion: emotional archaeology unearths a treasure trove of insights & new directions" - I talked about a whole series of fascinating possibilities that had emerged from revisiting the past like this.  One comment I made was: "How about the reminders from my student to my current self?   There's potentially an awful lot here.   Options include ... experimenting with taking a day every so often when I explore "just being", a bit as I did in those old ecstatic pilgrimages to Trinity Fellows Garden.   I want to remember Mary Oliver's words "I don't know exactly what a prayer is. I do know how to pay attention ... how to be idle and blessed, how to stroll through the fields, which is what I have been doing all day. Tell me, what else should I have done? Doesn't everything die at last, and too soon? Tell me, what is it you plan to do with your one wild and precious life?" I intend to explore making more time for "strolling through the fields ... all day ... (in this) one wild and precious life."

And at the end of November I followed up this idea, spending a day "drawn like blown cloud" around Edinburgh.  I wrote about it in the post "A day spent 'idle & blessed': report of an experiment".  It was precious ... "An experiment with 'being' in this surging, so appreciated, sea of 'doing'" ...  and yesterday I revisited the experiment.  I was immensely lucky.  After a wet, cold Spring, this mid-April day was stunningly beautiful.  Especially early on.  My son & his girlfriend were arriving from London by rail at a bit after two in the afternoon.  I wanted to be out for eight hours or so and get back to meet them.  The maths was straightforward.  I left the house just after six in the sun-drenched dawn.

It's a funny one, writing about this kind of personal experience.  This blog is primarily here to be helpful ... "An evidence-based blog on stress, health & wellbeing" ... and although most of what I write about is at-emotional-arm's-length research based information, many people have told me that they appreciate the posts that mix the personal with the evidence base.  In fact some people have commented that these are the posts that they find most useful.  So be aware of what's on the tin here.  This is a series of remarks I made into a dictaphone while I was on the walk, and a bunch of added facts & figures put in the next day.

"April, sunlight, ducks on the canal, birds singing, just lovely ... lovely ... aware of my luck and fortune ... feel quite tearful ... thinking of people who have died ... a friend who died of cancer last year ... last April trapped on that steep snow slope in Skye really not aware if I would be alive a year later ... not knowing if I would be able to walk a year later and now walking out of town along the canal ... beautiful."

"OK ... that was the first kingfisher I've seen for years on the canal ... just lilting ahead of me in the early morning ... what a treasure ... what a gift ... (using a phone camera) ... so actually a kingfisher and cormorant in the same picture but I don't think they'll come out very well."

"Thoughts of those who've died ... my mother just over three years ago, my father nearly quarter of a century ago, friends, my own death ... nearly ... a year ago.  And now, sitting on a great fallen tree trunk in the sunshine having breakfast, listening to the birds ... "mixing memory and desire" ... no, much better than that ... beginning to melt a bit ... allowing the out breath." 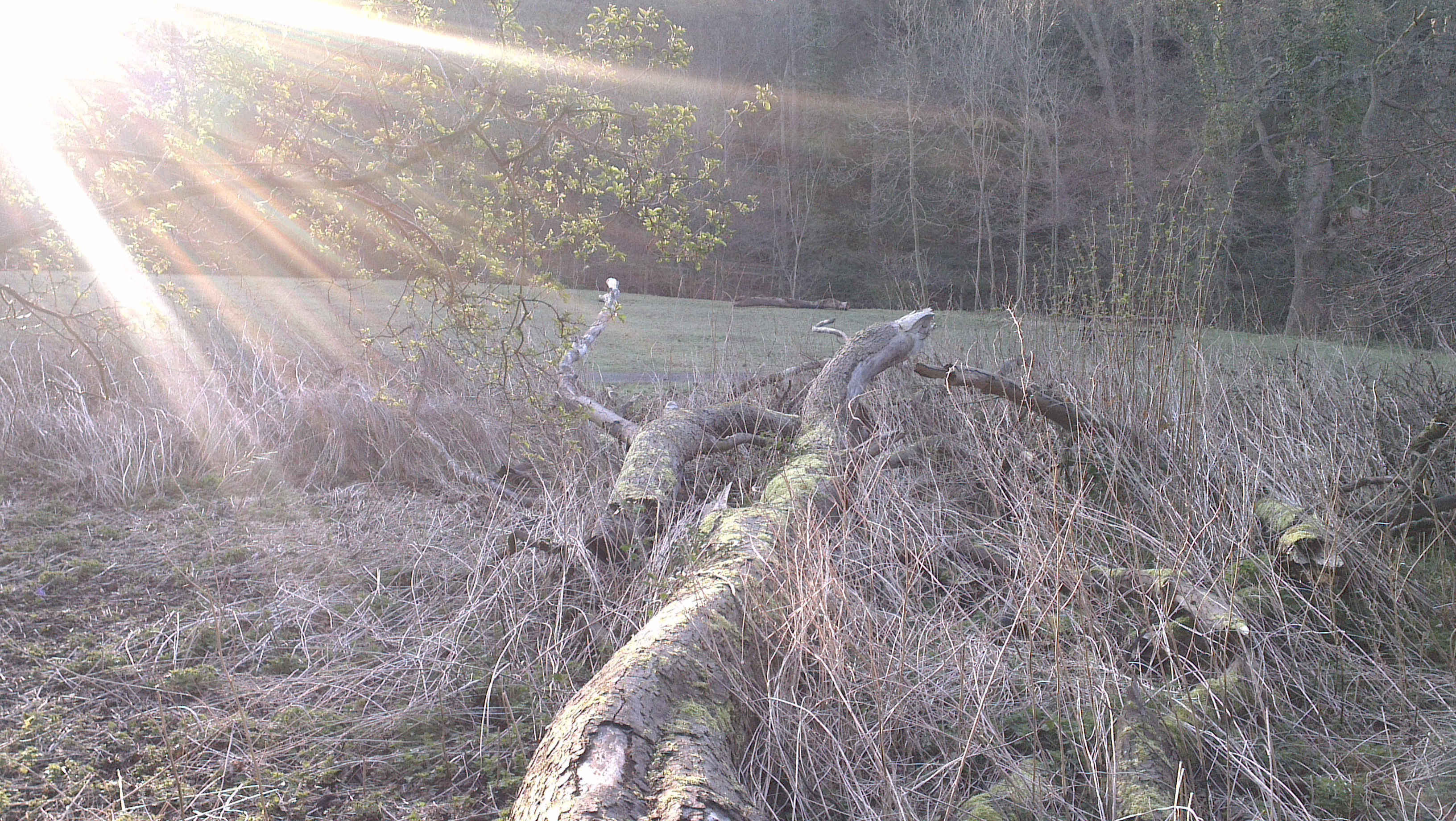 "I passed a couple of boys on their way to school early ... delightful conversation.  One says to the other "This is where the weasel is so important.  You have to kill him or he has to kill you!" ... love it ... "

"Still early in the morning, walking up by Bonaly Primary School and I see three quotations on a long glass partition that of course I've never noticed when going past in a car.  "Happy hearts and happy faces, happy play in grassy places.  That was how in ancient ages, children grew to kings and sages."  Robert Louis Stevenson.  And "Education is the leading of human souls to what is best, and making what is best out of them."  John Ruskin.  And "Learning is a treasure that follows its owner everywhere." Chinese proverb.  Lovely.  Particularly nice that it's quite subtle (the writing on the glass).  I can imagine if I'd gone to that primary school ... yeah ... it would have touched me.  Nice. "

And I head on up the hill, stopping by Bonaly Tower to stroke a huge ginger cat, and ... instead of following my usual route (veering left up the hill), I turn right to Torduff Reservoir, walk along the side of it, and then come back up to Bonaly Reservoir, and from there to Capelaw Hill and Allermuir.

"Interesting this taking the track unknown or less known.  I can feel myself beginning to fall asleep psychologically on the well known tracks and then following that gentle impulse to go to places that I hardly know or don't know at all ... I wake up a little bit more ... and it's a beautiful morning."  I've noted Ritchie & Bryant's 2012 study before ... "Positive state mindfulness: A multidimensional model of mindfulness in relation to positive experience" ... with its finding that three factors seem to particularly link mindfulness to positive experience - "Focused Attention, Novelty Appreciation, (and) Open-Ended Expectations."  In the blog post "Ways to happiness and life satisfaction" I wrote about the particular importance of "Engaged" and "Meaningful" life orientations, but I also highlighted the value for overall life satisfaction of being able to "stop & smell the flowers" ... that one can appreciate and feel pleasure & joy.  If you want to see how you score on these three life components, try the "Approaches to happiness" questionnaire on Martin Seligman's website.  In "Orientations to happiness and life satisfaction: The full life versus the empty life" Peterson & colleagues wrote "Different orientations to happiness and their association with life satisfaction were investigated with 845 adults responding to Internet surveys. We measured life satisfaction and the endorsement of three different ways to be happy through pleasure, through engagement, and through meaning. Each of these three orientations individually predicted life satisfaction. People simultaneously low on all three orientations reported especially low life satisfaction. These findings point the way toward a distinction between the full life and the empty life."  Or as the Christian mystic Angelus Silesius put it rather more confrontingly "All in good time we shall see God and his light you say.  Fool you shall never see what you don't see today."  And, more gently, Lao Tzu's "Who will prefer the jingle of jade pendants if he once has heard stone growing in a cliff?"

I do find Richie & Bryant's study on "Positive state mindfulness" intriguing.  In the post "Mindfulness during daily activities: is it helpful to vary the proportions of the five facets?" I wrote "To me, mindfulness during daily activities seems to have different flavours at different times.  I wonder if this is useful, if varying the flavour depending on the situation can be helpful?" and I gave three contrasting examples from the previous three days.  There are fascinating cross-connections here ... mindfulness, wonder, joy, openness, inner quietness, exploration.  That classic passage from the King James version of St Matthew's gospel "At the same time came the disciples to Jesus, saying, Who is the greatest in the kingdom of heaven?  And Jesus called a little child to him, and set him in the middle of them, And said, Truly I say to you, Except you be converted, and become as little children, you shall not enter into the kingdom of heaven."  And the New International version is even simpler "Truly I tell you, unless you change and become like little children, you will never enter the kingdom of heaven."  Simplicity, inner quiet, wonder, joy.  I remember at university slipping into gentle ecstasy eating a bowl of muesli in the sunlight.  What is this deep connection?  How does this depth of being fit into a life full of doing?  T. S. Eliot's poem "Four quartets" speaks to this ... ... I certainly intend to schedule in further "idle & blessed" days and hopefully too, carry more of this taste ... this ability to savour better ... into the faster currents of my usual life.