So here I am bright & early on the first full day of a ten-day personal retreat at the Krishnamurti Study Centre in Hampshire.  Why?  Well I was conscious of three intertwining reasons when I booked this time away several months ago.  One is about doing & being, another about awareness, and the third is about getting a perspective on my life.  And who knows, maybe I will be surprised by other reasons that emerge during my stay here. 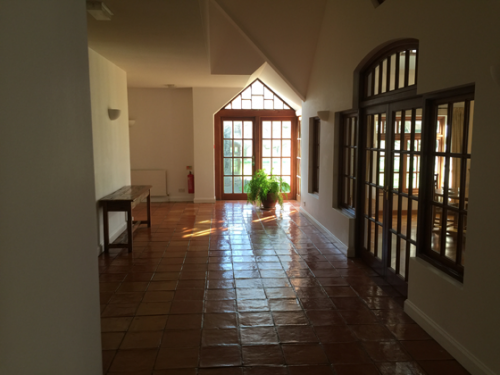 So the first conscious reason for coming is to spend some time with a different balance of doing & being.  My life at home is very much about “doing”.  I live a “busy” life … and I love it … or I tell myself I love it.  Part of coming away here on this retreat is to give myself an opportunity to question my assumptions, how I see things, how I live.  And I certainly live busily, working as a ‘medical’ psychotherapist, exercising, meditating, seeing a wide circle of friends, meeting up with children & grandchildren, engaging in a series of interests (dance, book group, badminton, therapist group, and so on), and sharing this journey with Catero, my partner of nearly forty years.  To me it feels a wonderfully “blessed” life.  That’s such an easy, potentially sloppy thing to say … the kind of comment that trots out in a speech at a wedding anniversary or other social gathering.  But actually I really do lead a “blessed” life in so many ways … doing a job that feels worthwhile, stretching & endlessly fascinating, still fit & healthy & hungry for living in my mid-60’s, entwined with sensitive, fine friends, genuinely happily married, children & (step-) grandchildren blossoming.  Wow … I’m very, very fortunate.  I know this won’t last.  Illness, accidents, old age … “death & taxes”.  These, and other things, will come.  And I’m still immensely fortunate … and very busy.

I came down from Edinburgh by train yesterday.  Starting out, I remember saying to the taxi driver “This feels like a perfect Edinburgh day” … a cold, clear, sun-splashed February morning … light bathing & reflecting off the stone of the castle and the wonderful bare-branched trees.  And then, in the second taxi of the day, coming from Winchester station and approaching the Krishnamurti Centre, I became aware of a raw tenderness in my chest.  I’ve visited this place over many years.  I guess I first came to see Brockwood, the Krishnamurti school here in the UK, back in about 1974.  I was hitch hiking & I remember arriving in time for lunch.  I was studying medicine at the time.  Coming into the big busy dining hall, there only seemed to still be one seat available half way down one of the long tables.  I made my way there and sat down, only to find I was just across the table from Krishnamurti himself.  My memory is that we made low-key conversation about the East End of London, where I was a clinical medical student, and other “small talk”.  Kind of special though, precious, to sit down like that and find myself opposite a man I had so much respect for.

After arriving here last night, I unpacked, and went for a walk in the deepening twilight.  Through my head ran the Eagles song “Desperado”.  It’s a song on one of the several playlists I use when I’m running: “Desperado, why don’t you come to your senses?  You’ve been out ridin’ fences for so long now.  Oh you’re a hard one, but I know that you’ve got your reasons.  These things that are pleasing you can hurt you somehow.  Don’t you draw the queen of diamonds boy, she’ll beat you if she’s able.  You know the queen of hearts is always your best bet … Desperado, oh you ain’t getting no younger.  Your pain & your hunger they’re drivin’ you home.  Freedom, oh freedom, that’s just some people talking.  Your prison is walking through this world all alone … Desperado, why don’t you come to your senses, come down from your fences, open the gate.”  Well that’s a pretty good song to have in my head at the start of a retreat.  The rain came down gently.  I didn’t see a soul on the very quiet little country lanes.  An owl hooted as I headed back.

And strangely last night at supper in the Study Centre, there was another surprising coincidence.  I’m here on a self-directed, “personal retreat” for ten days.  But over this first weekend there are quite a few people in the Centre … all nineteen bedrooms are full.  There’s what’s called a “theme weekend”.  Apparently fifteen or so participants are meeting over a couple of days to explore the question “Is it possible to live without conditioning?” or something similar.  The beautiful refectory was fairly busy at suppertime and, after collecting some food, I made my way quietly to a table on my own.  Pretty soon though a man came over and asked if he could join me.  He’s here on the theme weekend and, I’m not sure why, but the conversation turned to his sense that he’s one of the only people from where he lives up North who seems interested in Krishnamurti’s teaching.  Surprising coincidence … we’re both from Edinburgh … presumably the only people in the room from up there and we had sat down at the same table.  However coincidence was having fun.  A third man joined us.  He’s neither on the theme weekend, nor even staying here.  He tried to book a room, but the Centre is full so he’s just come to visit … yes, you’ve guessed it, he’d driven all the way down from Edinburgh.  Three guys sitting round the table, arrived from up North by plane, train & car.  A gentle meeting.  What did Fritz Perls say about conversation?  Something like “Conversation can be about chicken shit, bull shit, or elephant shit”.  Well we moved across the different forms of excreta, small-talk chicken shit, jobs & families bull shit, and some “Well is it possible to live without conditioning?” elephant shit.  And the guy who’d driven down from Edinburgh on something of a whim, had very bright clear eyes and had obviously been deeply affected by Krish’s writing & audiotapes.  And so too had our other companion … life, it seems, had treated him roughly over these last years and K had been very helpful for him.

“Doing & being” … this ten day visit.  Apparently when asked about the proposed Study Centre (which has been here since 1986), K said it should be beautiful and austere.  And it is, a kind of luxurious, simple, extraordinary “monastery” – see the short online “video tour”.  It’s a privilege to spend time here.  I will be off all email during my stay (my longest “media fast” for decades).  Apart from meals, there is no “programme”.  I can organise my time as I choose.  When I decided to come away for a retreat, I considered all kinds of options.  The obvious one was to go to some kind of led meditation retreat.  Somehow this didn’t feel right for me at the moment.  I went to a whole series of one to two-week long led retreats when I was in my 20’s.  Fine … fascinating to explore what happens over that kind of highly structured format.  But I’m a bit allergic to being told what to do, and … at the moment … I don’t want to go back to that sort of environment.  I wondered too about taking a tent into the hills, or getting access to a country cottage somewhere on my own.  In the end I settled on coming back to the Krishnamurti Centre.  Besides visiting the school two or three times in my 20’s, and coming to Krishnamurti’s talks both here & in Switzerland, I later stayed a couple of times fairly briefly at this Study Centre, first on my own and then with my mother.

I’ve had tastes of what being here for some days can provide.  I expect I may not “enjoy” chunks of this visit.  Having no programme, away from my usual tightly timetabled schedule is going to be a bit weird I suspect.  Walking, yoga, some reading & writing, quietness, emptiness maybe.  We’ll see … certainly a shifting of the doing/being balance that I’m used to.  And see tomorrow's post "Settling & questioning".