I recently wrote a blog post on "Personal social networks (1st post): Dunbar's 5-15-50-150 model".  I emphasised the huge importance of our social networks for improving life expectancy, protecting against psychological disorders, and boosting our happiness & wellbeing.  What's not to like?!  I went on to introduce Robin Dunbar's work and his layered model of personal social network structure.  I then talked about the key inner support clique layer.  Outside the support clique is the sympathy group or - stated possibly less awkwardly - outside our very closest relationships we have a layer of close relationships.  If the support clique numbers very approximately 5 (including a possibly even more central 1-2), then the sympathy group (see the slide below) includes these 5 and adds approximately another 10 (0 to 30?!). As with all network layers, too few people in the layer can produce vulnerability, while too many tends to result in weaker emotional connections. 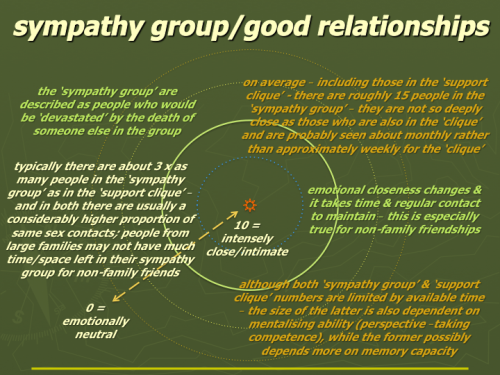 Often though attraction between people is based on more obviously shared characteristics.  This is illustrated in value & personality overlap with online 'friends' - see "Homogeneity of personal values and personality traits in Facebook social networks" - and other research suggests tastes in music, religion, and ethical views are often also important - see "Playing with strangers: which shared traits attract us most to new people?".  Unsurprisingly, extraversion is significant - "Popularity, similarity, and the network extraversion bias" - as too is mood state - "It takes three: selection, influence, and de-selection processes of depression in adolescent friendship networks".  I particularly like the paper "Do birds of a feather flock together?" with its abstract stating "Cooperation requires that individuals are able to identify, and preferentially associate with, others who have compatible preferences and the shared background knowledge needed to solve interpersonal coordination problems. The present study investigates the nature of such similarity within social networks, asking: What do friends have in common?"  The authors looked at similarity & emotional closeness for friends/acquaintances (not kin) in the sympathy group (contacted monthly), in the active social network (contacted yearly), and in the total network (contacted every few years).  This information about the typical importance of similarity in building emotional closeness can be helpful when looking at our relationships - see the further post in this sequence "Personal social networks (4th post): birds of a feather flock together". 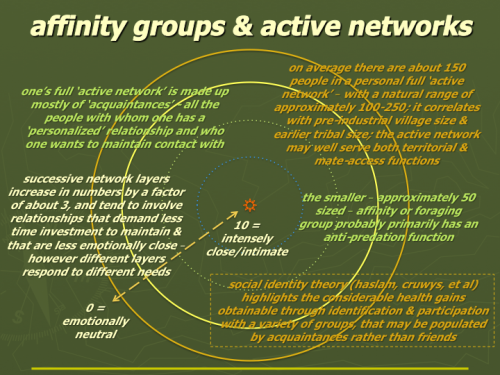 Human beings' full active social networks are significantly bigger than those of other primates.  In our evolutionary hunter-gatherer pasts, this had major advantages for survival and the success of our species.  Managing relationships with up to approximately 150 people pushes the capacity of our brains, and was probably a major factor in brain evolution.  Robin Dunbar, professor of evolutionary psychology at Oxford, argued convincingly for this viewpoint in his important paper "The social brain hypothesis" published back in 1998.  He has written a number of popular books including "Human evolution: our brains & behaviour" and "How many friends does one person need?: Dunbar's number and other evolutionary quirks", while his website gives links to over 240 of his academic publications.

It's important to emphasise an additional point about these outer network layers.  This is to acknowledge the often underestimated value of group membership for both our physical and psychological health.  These issues are explored in Social identity theory - see the two blog posts "Social relationships, group membership and health: background" and "Social relationships, group membership and health: what we can do".  And, as I wrote in the first of these two posts: Sani & colleagues, in their 2012 paper "Comparing social contact and group identification as predictors of metnal health", challengingly stated "Current research on social integration and mental health operationalizes social integration as frequency of interactions and participation in social activities (i.e., social contact). This neglects the subjective dimension of social integration, namely group identification. We present two studies comparing the effect exerted by social contact and group identification on mental health (e.g., depression, stress) across two different groups (family; army unit), demonstrating that group identification predicts mental health better than social contact." And as for physical health - after reviewing the research evidence, in his book "Bowling alone" - Robert Putnam concluded "As a rough rule of thumb, if you belong to no groups but decide to join one, you cut your risk of dying over the next year in half" (2000, p.331).

The next post in this sequence - "Personal social networks (3rd post): assessing how we're doing" - provides a way of charting our personal networks and starting to look at how to better look after them.