Well here I am, eight or so miles up Glen Affric, lying in a little one man tent in the rain.  I'm 59 today.  I woke at 2.30am wanting a pee and murmured a quiet "Happy birthday" to myself before choosing a moment between showers to stumble out to relieve myself.  I could see a few stars through the clouds.  Since then it's been raining pretty much every time I've woken.  So comfortable, toasty in a sleeping bag on a self-inflating mat in this beautifully designed Hilleberg Akto tent.  Amazing.  I came in on a mountain bike yesterday along the Forestry track south of the loch, bumping and occasionally having to get off to push the bike ... but such an improvement on walking and having to backpack in all supplies, tent, sleeping things - everything I need for three days.  It would have been heavy and slow to have carried it.  As it was, I arrived pretty quickly and pretty easily. 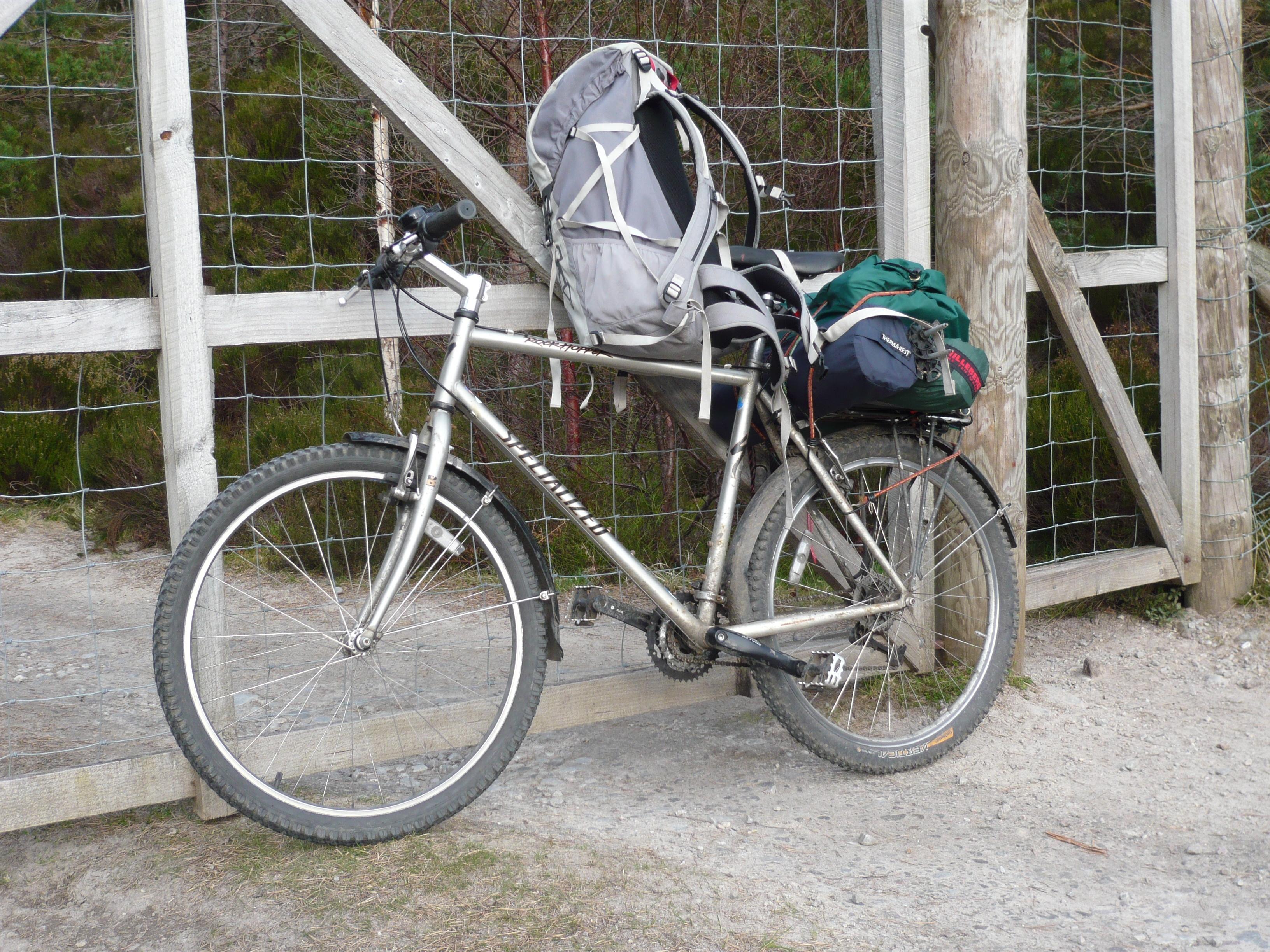 Today though it's going to be about walking rather than cycling.  I'll see what the visibility's like once I'm out and make a final decision then on how I'll start up to the three big hills I hope to climb today - An Socach (the snout), Mullach na Dheiragain (summit of the kestrels), and Sgurr nan Ceathreamhnan (peak of the quarters).  Right now though, it's time to make breakfast, open the two birthday cards I brought in with me, maybe sing myself a quiet version of happy birthday, and get going. (Well that was a surprise ... I reached for the birthday cards and there was already a large black slug sitting firmly on one of them.  I had company I didn't know about last night.)  I read the two lovely hand-drawn cards from my wife and son.  I'm moved to tears. 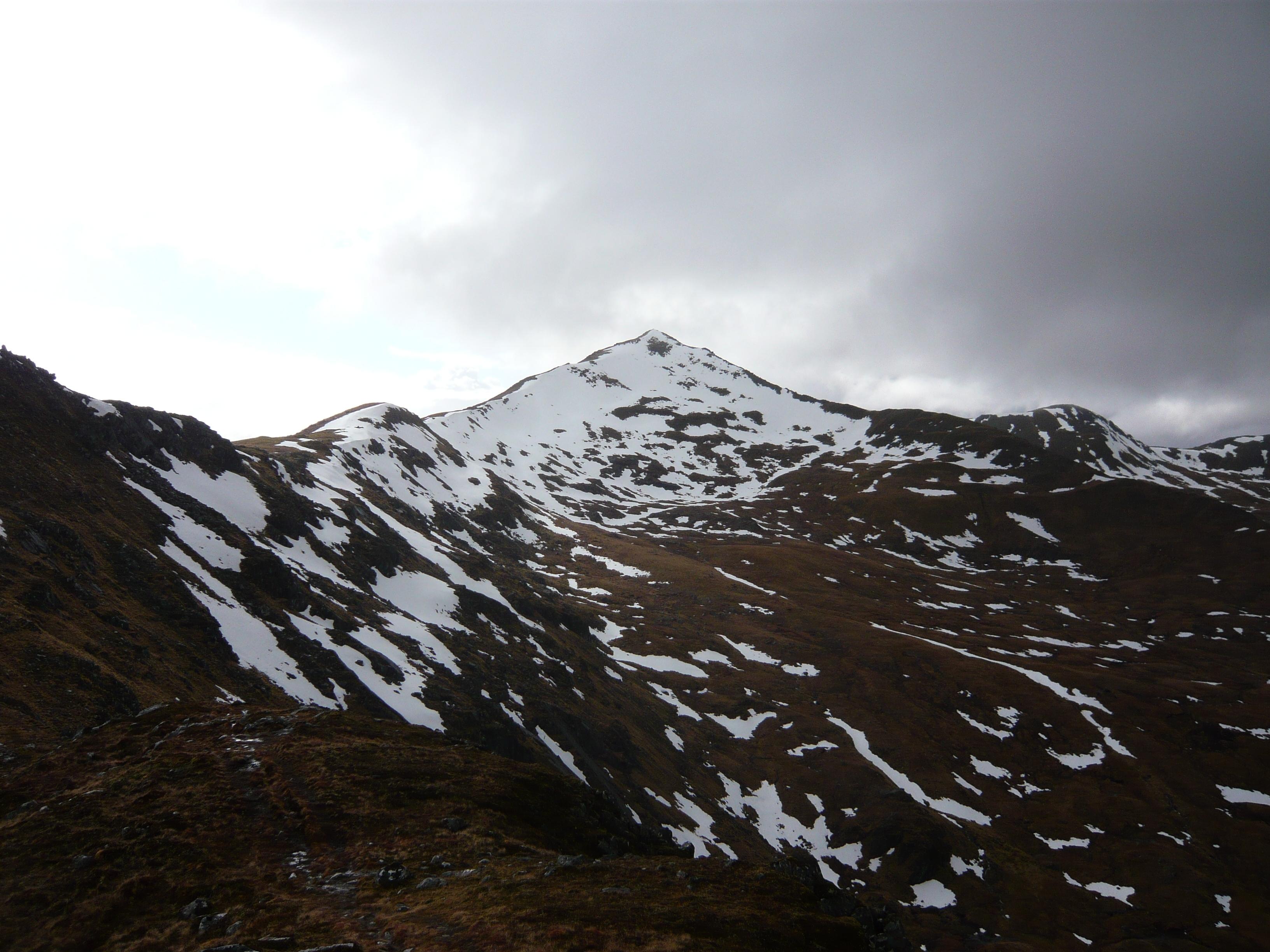 ... and now it's evening.  Between nine and ten hours walking today and, once I left the track down by the river and started up into the mountains I didn't see a soul throughout the walk.  Three big hills.  A little too much for me in the weather ... rain, snow and hail with quite high winds at times too blowing it all at me horizontally.  Just occasionally a short interval of sunshine.  Beautiful, wild country.  Stunning.  My weather forecasts for the next couple of days are taken from the web mountain weather information service  before I left Edinburgh.  However if there's any accuracy in the forecast for tomorrow - morning is likely to be better than afternoon.  Again I'm aiming to climb three big hills, but I'll probably try to start early, so no writing at breakfast time tomorrow.

It feels good to challenge myself physically like this, although - on reflection - I'll try not to be so remote for so long again.  I'm out of mobile range and not scheduled to "check in" with my wife Catero for a couple more days.  If I'd broken a leg or badly twisted my ankle far out on the ridge today, I might well have had to spend three nights out.  I don't know that I'd have got through that too well despite carrying basic survival equipment.

The challenge is basically good though.  George Vaillant in his fine book "Aging well" reports on "an epic series of studies (where) Harvard University ... followed 824 individuals from their teens to old age."  One of the stand-out findings was how important the basic lifestyle behaviours are for flourishing into middle and old age.  Eating well, not drinking too much, not smoking, being a reasonable weight, staying fit.  Basic, but rare - only about 3% of the population tick all these boxes, and this is true even in groups of health professionals.  It makes a huge difference.  I'm concerned when I see the shape that many fine psychotherapist colleagues are in.  Mind and body are so linked.  The Norfolk study found that people living healthily had a biological age 14 years less than someone of the same chronological age living unhealthily.  There's the fascinating American study too following men in their mid-50's for 40 years.  Those ticking six basic health boxes - not smoking, not drinking too much, reasonable weight, good grip strength (a simple estimate of overall muscle health), healthy blood glucose and normal blood pressure - had a 55% chance of reaching age 85 without incidence of 6 major chronic diseases and without physical and cognitive impairment.  Those not ticking any of the boxes only had a 9% chance  - only a sixth as likely - of being so lucky.