“ Disagreements between scientists of good intention are merely truth in the making. ” - Andrews

"Wishing to be friends is quick work, but friendship is a slow-ripening fruit."   Aristotle

So I went deep into the trip.  Again there was that sense of parallels to previous high-dose psychedelic journeys I've taken, and there are also deeply individual colours to each of these trips as well.  There was a laughing Cosmic Joker, who I hadn't met before, who put in occasional comradely appearances this time.  And I think at this approximately 60gm dose, I transcended a sense of time & space more fully than I've ever done in the past.  But I later scored myself at an overall 85% on the Mystical Experiences Questionnaire (MEQ), which positioned this trip somewhere between the two 83%'s on the 44gm journeys back in March and the 89% 30gm journey in July.  Yes, that's right, the 30gm trip, on my own with just a personal trip sitter and using my own playlist, felt more total than today's trip on nearly twice that dose.  I was intrigued later to reread the 'High dose psilocybin is associated with positive effect in healthy volunteers' research paper with its abstract illustrating the same point as it commented "The aim of the current study was to investigate the relationship between escalating higher doses of psilocybin and the potential psilocybin occasioned positive subjective effects.  Methods: Healthy participants (n=12) were given three escalating doses of oral psilocybin (0.3 mg/kg; 0.45 mg/kg; 0.6 mg/kg) or (18.8–36.6 mg; 27.1–54.0 mg; 36.3–59.2 mg) a minimum of four weeks apart ... Subjective effects were assessed using the Mystical Experience Questionnaire and Persisting Effects Questionnaire.  Results: ... There was a significant difference between dose 3 compared to dose 1 on the transcendence of time and space subscale, while no dose-related differences were found for Mystical Experience Questionnaire total scores or rate of a mystical experience ... Persisting Effects Questionnaire results revealed a moderate increase in sense of well-being or life satisfaction on average that was associated with the maximum Mystical Experience Questionnaire total score."   From my own personal experience of filling out the MEQ on a whole series of occasions over this last year, I would say that it's useful but not terribly 'fine-grained' as an assessment tool.  It says some interesting things about the depth & extent of a psychedelic or other mystical experience but it certainly doesn't for me capture much important detail and I would contrast scores of 83, 85 & 89% cautiously, being careful not to read too much precision into these numbers.  Remembering that anything over 60% is classified as a 'full mystical experience', they are all clearly very deep journeys ... and earlier in the year I had even scored 76% on the MEQ taking just 12.5gm of truffles and walking out into nature (see the addendum at the bottom of this earlier post).

Although the heart of the trip ... the peak of the high plateau ... was rich & precious, I was interested afterwards to note that, even on nearly 60gm of truffles, I was able a little to 'make decisions' or at least to 'reconnect to intentions' (to head for dissolution rather than stay with psychedelic 'fascinations'... the sense of swimming through psychedelic frogspawn I mentioned in the last post) and to sit crosslegged in a meditation position (although meditation rather loses its meaning in these states ... except possibly the zazen injunction that just sitting on one's zafu one is already home).  Intriguingly, on this trip ... my fourth high dose one this year ... it was coming off the high plateau that turned out to be most memorable and I think helpful aspect of the trip.  As I said in the first post in this sequence ... I came in with half a dozen or so questions.  One was, with the experiences I've had this year, can I navigate the trip a little ... and that seemed to be the case ... although navigate is a relative term as one dissolves into these huge energy flows.  A second was how would I cope with a playlist that I wasn't very fond of (an Imperial College one) being broadcast through a loudspeaker into the ceremony space.  And a third was could I be in the group in a way that was helpful for others and also honoured my own process.  I was still deeply in the trip when I started struggling a bit with a deep sense that I wanted to stand up and dance.  This didn't seem straightforward ... I was mostly dissolved by the psylocybin, the music wasn't great to dance to, and the room was set up for us to stay lying on our mattresses rather than to move around.  Mm ... a challenge, to 'jam in the jazz band' ... to be true to the process emerging in me, while honouring the needs of others in the room.  So I stood up and danced for maybe two or three hours.  Here's the picture I drew afterwards: 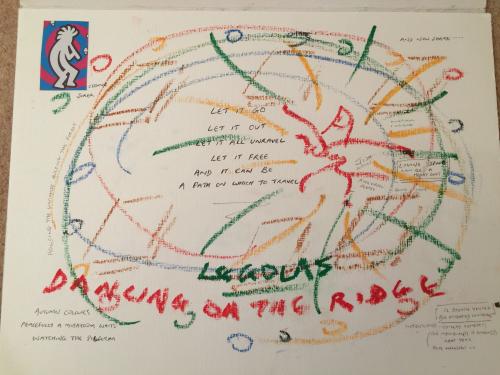 And it was wonderful, a joy, a dissolving bliss ... despite the music!  And what was also wonderful was that this being true to what was emerging in me seemed actually to be of help for others.  After we were down and talking about our experiences during the trip, a whole series of people spontaneously mentioned their appreciation of 'my' dancing.  In this skinless, immensely sensitive psychedelic state, I experienced a new insight into my many-years balancing between spine (being authentic, autonomous, courageous, true to one's emerging process) and heart (kindness, compassion, deep sensitivity and care for others).  I scored way up on the Emotional Breakthrough Inventory (EBI) ... the Imperial College questionnaire that has largely felt irrelevant in my previous (non-group) trips.  Precious ... a deep learning that I take away from this trip ... that being authentic & true to myself doesn't always have to be a balancing act with being sensitive, compassionate & kind for others.  It can sometimes be a balancing act, but it can also be that living with deep courage and truth ourselves can be one of the greatest gifts we can give to others.  Rich ... precious insight ... and of course, on psychedelics, this kind of learning can be so deep.

And gradually the psychedelic ceremony came to a close.  It had taken about 6 hours, from roughly 1.00 to about 7.00pm.  We re-entered the guided imaging ... bringing our coracles back to the beach after our huge & different journeys.  A couple of the facilitators sang to guitars ... the second song had me singing along too ... Bob Marley's 'Three little birds - don't worry about a thing'.   Lovely.  It can be a little tricky gathering people in after a big trip like this.  People's experiences will have varied widely and we vary a good deal as well over how soon we feel mostly back to normal consciousness (maybe not fully so until after a night's sleep).  We formed a circle and shared briefly.  I think we had a couple of rounds ... maybe the first was just sharing a single word or phrase for where we were/our experience (I said "Truth") and a second round to allow a bit more brief sharing.  We had a fairly quiet meal together ... we had been encouraged to let our experiences settle and not talk too much at this stage.  I would have appreciated a more explicit option to explore doing some writing and possibly some drawing (drawing things could be provided) for anyone who had wanted to.  I actually went back to my room and recorded a fairly brief set of memories from the trip.  Many people had had huge experiences, so it was fine to be gentle and let people settle.  Some went to bed early.  Others gathered with the facilitators to sing for a while.  I gave a rendition of Daniel Lanois 'The Maker' ... maybe not quite up to Daniel's standard!

Gosh ... this reflection on the group retreat is in danger of turning into a bit of a 'book'!  I particularly want to reflect on what I feel I've learned in subsequent posts.  So to finish up on my personal journey here.  The next day was for integration.  I think the facilitators were partly following a sense of wanting to focus on deeper connections ... to ourselves, to others, to the world ... as this does seem often to be something psychedelic experience helps us with.  I was a little impatient with the structures we used.  I've done so many 100's and 100's of hours in interpersonal groups, that I didn't want to spend much of this integration day on structured interpersonal exercises (that I've done variations on so many times before).  And our exposure to nature was a bit limited ... mostly just in the house's garden.  I did appreciate being helped with integration ... but the particular menu of suggestions we used wasn't really my thing.  I loved it, but sometimes "The good may be the enemy of the excellent" and my sense is that there were other forms of integration (for example, that I used on my individual trips earlier in the year) that would have suited me better.  But is was special, precious time together ... bonding even more deeply ... gentle.  And then 48 hours or so after taking the trip we were heading back in a bus to Amsterdam and home.  For more reflection & the lessons for me, see the next post in this five-post sequence ... 'Psychedelics: a group retreat - lessons: ceremonies, duration & organisation'.

P.S.  There was already a suggestion from the Imperial College group that, for those going into a psychedelic trip with lower wellbeing, working on emotional difficulties might be of real value ... over and above Mystical/Peak Experiences ... see "Emotional breakthrough and psychedelics: validation of the Emotional Breakthrough Inventory".  Commenting on this study, I would point out that the authors found that the Emotional Breakthrough Inventory (EBI) added to our ability to predict the extent of overall benefit likely to be produced by a psychedelic experience (over and above prediction from the Mystical Experience Questionnaire (MEQ) & the Challenging Experience Questionnaire) … but this usefulness of the EBI was particularly demonstrated in a selected sub-section of the 379 participants who took the online survey.  This sub-section of 75 participants were the 20% with the lowest initial well-being scores.  EBI scores were also likely to be more relevant for those who took higher psychedelic doses, specifically with personal therapeutic intentions & willingness to work with difficult emotions, and in an environment that was designed for therapeutic support.  So, the take-home message (from this & other research) seems to be – if I go into a high-dose psychedelic trip with low well-being, then I’m more likely to encounter challenging emotional experiences.  A readiness to face & work with these challenging emotions, especially if I have therapeutic support, means that they may well transform into breakthrough experiences that lead to welcomed, long-term gains.  Now, writing this P.S. in January '20, there is a further study just published from John Hopkins (the home of the MEQ) ... "Psychological flexibility mediates the relations between acute psychedelic effects and subjective decreases in depression and anxiety".  This study is fascinating in a series of ways.  Scores on a new scale, the Psychological Insights Questionnaire, seemed to be more strongly associated than MEQ scores were with decreases in depression/anxiety via improvements in Psychological Flexibility.  Note however that although this seems a genuinely important new set of findings, once again the focus here is on decrease in 'ill-being' rather than increases in 'well-being' or 'self-transcendence'.  So the authors comment "The sample used for our primary analyses (described above) was a group of individuals who reported a spontaneous or intended change in anxiety or depression following a psychedelic experience."

Again for more reflections & the lessons for me, see the next post in this five-post sequence ... 'Psychedelics: a group retreat - lessons: ceremonies, duration & organisation'.