'Breaking Convention' - the fifth biennial international conference on psychedelics - took place at Greenwich University in London from 16th-18th August.  There were apparently 1,200 or so attendees for the 6 concurrent programmes - academic, workshop, performance, cinema, entertainment & installations - as well as an art exhibition.  I went primarily because it allowed me to hear pretty much all the relevant research groups in the UK present on their current findings.  As you can see from the other quite extensive writing about psychedelics on this website, I'm very interested in the encouraging emerging research highlighting potential therapeutic value of psychedelics.  Although I focussed on the academic programme, there was much too much even here to manage an overview, as there were five presentations running simultaneously in different rooms over each of the three days of the conference.  Here are details of the 60 or so presentations given on the first day.

In the first half of the morning I went to the symposium on microdosing.  I found David Erritzoe's talk on "What we (don't) know about psychedelic microdosing" helpful in confirming my reading of recent microdosing overviews that emphasise how preliminary our current understanding of microdosing is so far.  Good information sources here include the excellent free full text paper "Microdosing psychedelics: More questions than answers?  An overview and suggestions for future research", Torsten's Passie's book "The science of microdosing psychedelics" and emerging results from the Imperial College linked "Microdosing survey" & "Self-blinding microdose study".

The second half of the morning had me rather reluctantly leaving the microdosing symposium to go to the one on Ceremony, which involved three presentations about psychedelics used in Group retreat formats.  However, for me, this second symposium turned out to be even more interesting than the first.  If current encouraging research on the value of psychedelics for a whole series of difficult to treat disorders (as well as for interested members of the general population) proves durable when tested in well-conducted studies involving larger numbers ... then there are going to be major challenges in working out how to provide this kind of help for the many people who might benefit from it.  Most research studies at the moment have two co-facilitators guiding one participant (1:0.5).  I've experienced good support from just one facilitator (1:1).  There were reports later in this conference on MDMA-assisted group therapy for PTSD using four facilitators for six participants (1:1.5), and the UK Psychedelic Society retreats (for non-distressed subjects) now use as few as one facilitator for five participants (1:5).  Clearly there are possibilities that using group formats can increase the number of people that experienced facilitators can helpfully support.

The three presentations began with the excellent Hannes Kettner, from Imperial College, speaking on "Psychedelic communitas: Exploring the role of intersubjective experience during ceremony" with an abstract reading "Legal in many countries, retreats working with psychedelics and plant medicines offer a structured, supportive environment for an ever increasing group of individuals seeking healing, insight, or personal growth through the use of these compounds. Yet, little empirical research has been done on the psychological, social, and environmental factors - 'set' and 'setting' - which determine acute subjective and long-term responses to guided experiences in ceremonial and other naturalistic environments. In this talk, I will focus on the social components at play during psychedelic ceremonies and retreats, proposing a conceptual framework for the interpersonal dimension of psychedelic experiences inspired by anthropological research on ritual process and rites of passage."

Hannes linked his talk to Victor Turner's concept of 'communitas' - "a state of equality, comradeship, and common humanity, outside of normal social distinctions, roles, and hierarchies" - see Turner's book "The ritual process: structure & anti-structure".  Hannes' research explored the hypothesis that ... in addition to participants' subjective reports of, for example, mystical-type or emotional breakthrough experiences ... "Intersubjective experience (Communitas) during ceremony contributes to increased psychological well-being and social connectedness".  Four weeks post-ceremony was a key endpoint for measuring these positive changes, although there were also more immediate (e.g. day after) and more delayed (e.g. at 6 & 12 month) assessments.  Communitas during the ceremony itself was measured using an 8-item scale developed from earlier research studies on this variable.  (Here's a copy of the Communitas Scale (as a PDF file & as a Word doc) illustrating the questions used).  As you can see from the Summary slide below, greater levels of group Communitas lead to better outcomes.  Communitas was particularly contributed to by the presence of supportive individuals, spiritual intentions, and rapport, while chanting, music and a low sense of threat also helped. 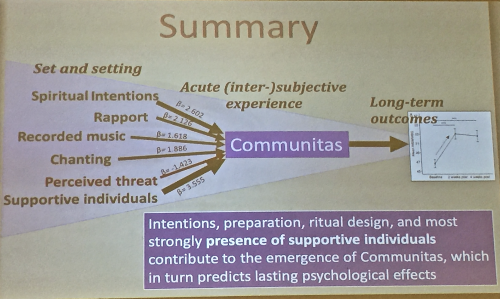 I think this is really interesting but, as quite often seems to happen in the psychedelic field at the moment, there appears to be some lack of awareness of other broader psychotherapy findings.  I do wonder why this Ceremony study used a variable like 'Communitas' when there is already overwhelming evidence that 'Cohesion' so strongly contributes to therapeutic outcomes in groups.  The slide below, taken from David Erritzoe's talk on microdosing, illustrates the usefulness but relative weakness of evidence from survey data like the Psychedelic ceremony study. 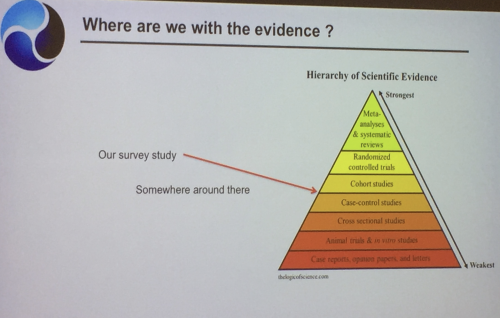 The Cohesion research however sits at the top of the 'Hierarchy of scientific evidence' - see, for example, last year's paper "Cohesion in group therapy: A meta-analysis".  We can track cohesion using relatively short questionnaires; encouraging group facilitators to pay attention to these measures improves treatment outcome; meta-analysis shows that group formats produce similar outcomes to individual formats; and this is even the case with highly emotionally labile populations.  What's not to like?  Let's not reinvent the wheel, we already know a lot about how to help group facilitators encourage increased levels of cohesion.  This year's wonderful new 3rd edition of "Psychotherapy relationships that work" contains so much information relevant to psychedelic-assisted psychotherapy, including an excellent chapter on "Cohesion in group therapy" which comments "Cohesion is the most popular relationship construct in the group therapy literature. This chapter reviews common definitions of cohesion and the most frequently studied measures. The authors also discuss a measure that may clarify group relations using two latent factors (quality and structure) to explain common variance among frequently used group relationship instruments. The results of a meta-analysis examining the relation between group cohesion and treatment outcome in 55 studies are presented. Results indicate that the weighted aggregate correlation between cohesion and treatment outcome was statistically significant r = .26, reflecting a moderate effect size ( d = .56). Six moderator variables were found to significantly predict the magnitude of the cohesion–outcome association (type of outcome measure, leader interventions to increase cohesion, theoretical orientation, type of group, emphasis on group interaction, dose or number of group sessions). Patient contributions, diversity considerations, and evidence-based therapeutic practices are highlighted."

I think group formats for psychedelic ceremonies & retreats, and for subsequent integration work may well become used increasingly, not just for general population experiences but also for people struggling with mental health & dependency issues.  If you're going to take part in a psychedelic ceremony or retreat yourself, do contribute to our growing knowledge base by participating in the 'Psychedelic ceremony study'.

The very warm-hearted & experienced Ciara Sherlock (a co-director & lead facilitator) then spoke more practically about the UK Psychedelic Society Experience Retreats.  There have been 50 or so of these retreats run since 2016, with over 600 people taking part.  I'm due to go on one myself in October, so it was good to hear more about them.  Here's an excellent half hour YouTube film - "Mind explorers: A psychedelic weekend" - giving more insight into what the retreats involve.  Then Laura Kaertner spoke on "The ceremony study - findings from the experience retreats".  Online notes stated "The presentation will focus on how individual traits (e.g. personality) and variables pertaining to set and setting shape the acute experience. Furthermore, they aim to identify aspects of the acute psychedelic experience (e.g. emotional breakthrough, insight) that shape long-term responses to ritualised psychedelic use; focusing on the effects on general well-being, feelings of connectedness and nature-relatedness, political perspectives and metaphysical assumptions."   The talk was interesting and helpful.  As I'm going on one of these UK Psychedelic Society Retreats in October, it was useful to have some idea of possible participant details: 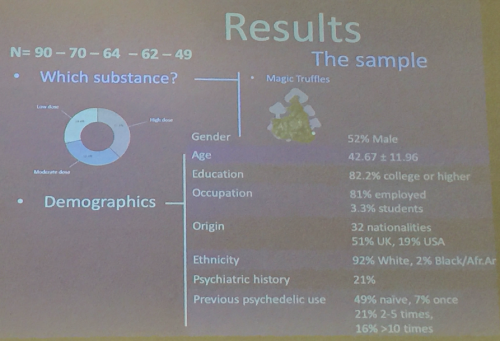 The decreasing 'N' numbers at the top left of the slide illustrate the dropout as the survey extended into increasing follow-up timings.  The rather blurred doughnut shows that somewhat over a third of participants took high doses, about a third moderate doses, and somewhat less than a third took low doses of psilocybin truffles.  Laura didn't clarify what these dose levels referred to, but our retreat group have been asked to buy ourselves two packs of 22gm High Hawaiians each.  My guess is that high dose possibly refers to about 33-44gm, moderate possibly 22-33, and low to less than 22gm.  It will be interesting to find out!  As I've commented on fairly extensively, gram doses of truffles are a rather approximate way of guaging how strong a trip will be.  Looking again at the Demographics slide, the average age of the participants is probably quite high for typical psychedelic users, but this retreat is held by experienced facilitators and so may be more attractive to this demographic.  It's noteworthy, for example, that 49% of the subjects hadn't taken psychedelics before and only 16% had taken them > 10 times.

Key points of Laura's talk are summarised in the slide below: 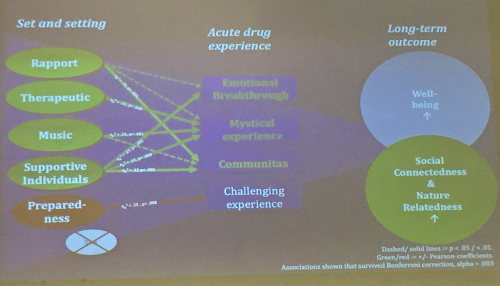 Emotional Breakthrough and Mystical Experiences are particularly strongly associated with greater long-term Wellbeing Benefits, while a higher level of Communitas is more strongly related to subsequent increases in Social Connectedness and Nature Relatedness. Solid lines demonstrate stronger links (p<.01), so the presence of Supportive Individuals is of particular importance with benefits for all three of these beneficial factors.  The use of Music (for example group chanting/singing and in-trip playlists) and a Therapeutic Setting (a strong sense that the environment was supportive of individuals' intentions/hopes) were also important for Breakthrough & Mystical Experience.

After these three presentations, I headed off for a lunch break ... and then took a very early place in the predictably packed lecture hall hosting a series of afternoon talks on Transformation by Robin Carhart-Harris, David Nutt, Ros Watts and other luminaries ...