I recently wrote a first blog post introducing the excellent workshop that Michelle Craske ran before this year's BABCP annual conference.  It's easy to see Michelle's work as only relevant for improving outcomes in exposure therapy of anxiety disorders.  However I think these ideas are important much more widely than this.  Probably most of us have significant areas of our lives where we would benefit if we had the belief & courage to change.  Self-determination theory research has underlined the wellbeing benefits of living more autonomously, while Shalom Schwartz's work on values highlights how self-direction in thought & action (when balanced with warm-heartedness & kindness) is so widely respected all around the world (for more on this important balance, see the second half of this blog post on "Compassion, wisdom & wellbeing").

But "the walls we build to protect ourselves too often become the prisons in which we live".  Rollo May said "Without courage other values wither away into mere facsimiles of virtue".  C. S. Lewis elegantly made the same point with his comment "Courage is not simply one of the virtues but the form of every virtue at the testing point", while Sidney Jourard warned "We camouflage our true being before others to protect ourselves against criticism or rejection. This protection comes at a steep price. When we are not truly known by the other people in our lives, we are misunderstood. When we are misunderstood, especially by family and friends, we join the "lonely crowd." Worse, when we succeed in hiding our being from others, we tend to lose touch with our real selves. This loss of self contributes to illness in its myriad forms." I think Michelle Craske's research on how to confront fear more effectively and change long-term patterns of over-timidity has relevance beyond anxiety disorders, to difficulties with depression, and to building wellbeing more generally.  In this second post I'll take each of the six points on Michelle's final slide and explore them more fully: 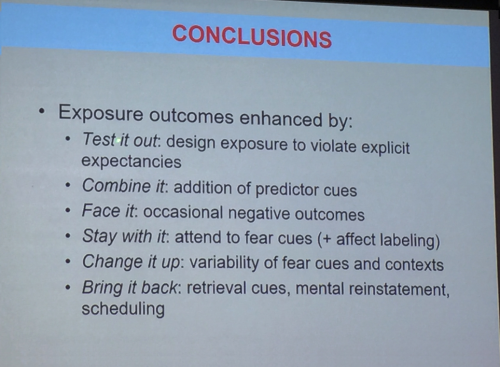 So first "Test it out: design exposure to violate explicit expectancies".  Michelle spent a good deal of time on this point.  It sits on an important rationale: 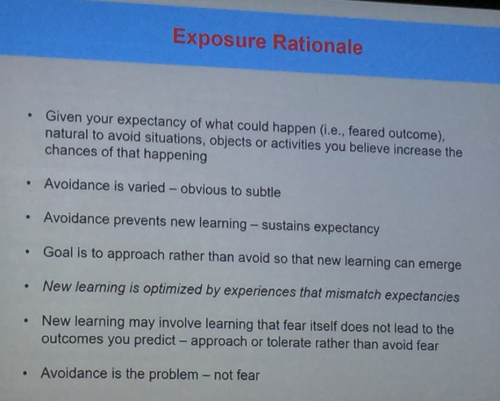 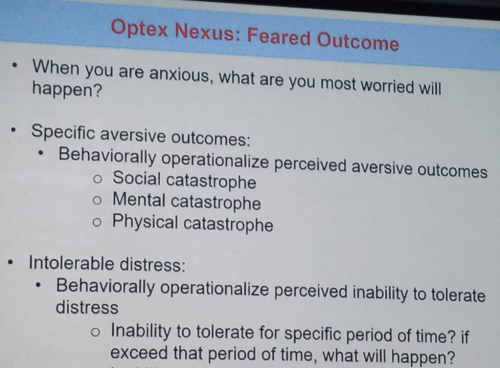 The Optex title on this third slide stands for Optimizing Exposure.  When I took the photograph I accidentally cut off the last line which reads *Inability to function?  How so?  Michelle is making the point that sometimes the anxiety someone feels doesn't seem to primarily focus on social, mental or physical catastrophe but more on feeling that the distress is intolerable.  If this is the case she asks about what catastrophe the sufferer believes will happen if the distress does continue ... and if this involves a feared loss of the ability to function, she asks how this will become apparent.  She also asks specifically how long the distress would need to continue for the sufferer to be really believe that the catastrophic outcome would occur (obviously a relevant point when designing exposure to disconfirm these fears).

This is such an important first step - designing & following through on a behavioural experiment that maximally contradicts the catastrophic expectations.  This is where learning begins to occur.  So one starts by clarifying the feared prediction which is likely either to be a physical or mental or social catastrophe, or intolerable distress.  One then clarifies "conditions or predictors of these expectancies".