Achieving clinical excellence: pre-conference workshop "What is FIT? The research behind it and how to do it"

I wrote yesterday about arriving in Sweden.  Howevery I'm primarily here for the ACE Conference, so how was yesterday's pre-conference workshop with Scott Miller & Bruce Wampold - "What is FIT, the research behind it and how to do it"?   Well, my initial response was one of some disappointment.  It felt to me that the combination of these two fine researchers/presenters was probably less than the sum of their parts ... in other words, either of these guys would probably have done a better job of running the day on their own.  However I have already done workshops with Scott - see, for example, a post from seven years ago "Client-directed, outcome-informed therapy: a workshop with Scott Miller" or probably the start of my journey exploring this area of client feedback "Guildford BABCP conference: what shall we do about the fact that there are supershrinks and pseudoshrinks?".  See too the embarrassingly unfinished first and second posts from the ACE conference in Amsterdam five years ago.  So I know a fair amount about Feedback-Informed Treatment (FIT), and I've also read much of Bruce Wampold's work ... so maybe I'm not a typical member of the workshop audience. 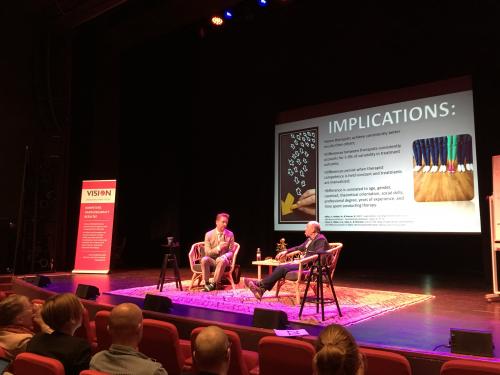 More to follow ... below are jotted notes I made during the day ...

Bruce cites a couple of interesting studies – Kaptchuk on IBS and Coan on hand-holding.

Scott cited Miller, Wampold & Varhely (2008) on child problems and Imel, Wampold, etc (2008) on alcohol dependence and others … basically arguing no difference between therapies …

Scott tends to quote old studies on the value of feedback …

Worth me noticing how depressing these results can be … worth noticing for how I myself present this material.  So easy to just come across as ‘clever-clogs’ who are putting hard-working, caring therapists down … a little like people painstakingly building houses of cards and then a rather unpleasant little boy comes over and knocks them all down.

Remember the comment “One of the greatest pains to human nature is the pain of a new idea.” (Walter Bagehot) or as the evolutionary biologist Julian Huxley put it many years ago “Eventually the old ideas will no longer serve, the old ideological framework can no longer be tinkered up to bear the weight of the facts, and a radical reconstruction becomes necessary, leading eventually to the emergence of a quite new organisation of thought and belief … The classical example, of course, was the re-patterning of cosmological thought which demoted the earth from its central position and led to the replacement of the geocentric pattern of thought by a heliocentric one.”

To bear this pain, it’s good to be re-linked to our values … what we’re deeply about … learning how better to relieve suffering … trying year by year, generation by generation, to do this more helpfully.

Actually Scott & Bruce were quite good after lunch in addressing this ‘discouragement’.

Data on supervisors being able to ‘intuit’ who their better supervisees are!? … apparently this emerged in study on PTSD involving Kevin Laska …

Interesting that Scott suggests that maybe we would do better to talk about ‘coaching’ rather than ‘supervision’.

Still learning about … just starting to learn about … how to apply deliberate practice for psychotherapists.  Scott suggests that this kind of ‘coaching’ may need to be focused on the particular strengths & weaknesses of each individual therapist.

Scott & Bruce talk more about ‘deficit correction’ … interesting whether ‘strength augmentation’ might be helpful too (or even more).

Interesting overlaps into research on the development of wisdom.

It feels to me that Bruce’s comments/input on empathy feels like I imagine a person-centred training might go about teaching … and this isn’t producing better outcomes?

I wonder too about the teaching style here … so hard to know how I would run a workshop like this … probably not just this way … maybe the combination of these two presenters is less than the sum of their parts.

What should we be practising?  Constructing a map of personal strengths or weaknesses