I wrote a blog post recently on "Therapist drift: black heresy or red herring?" where I argued that current research evidence does not suggest that "therapist drift" is of much significance for either increasing or decreasing the effectiveness of psychotherapy.  As you can see from the slide below though, I felt that the whole debate about therapist drift is something of a red herring when one considers the huge challenges faced by psychotherapy as a whole: 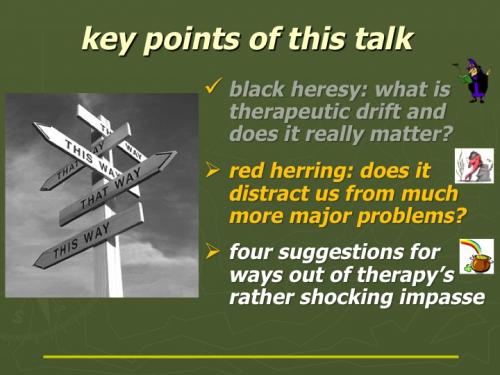 Here's a link to the eight slides where I discussed the current evidence base for the effectiveness of psychotherapy (and here's a link to the whole sixty nine slide talk).  Psychotherapists & counsellors have good reasons to be pleased about the helpfulness of what they typically offer, as is evident from the slide below which is based both on the excellent work in the classic "Handbook of psychotherapy and behavior change" and information presented in Wampold & Imel's fine book "The great psychotherapy debate (2nd ed)": 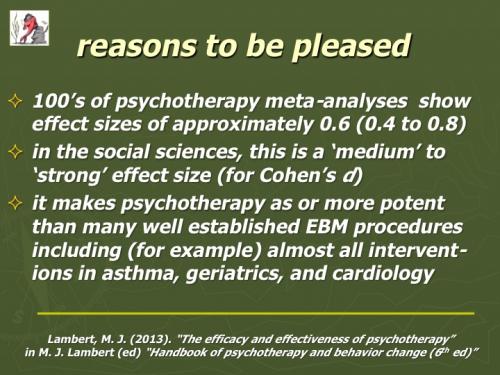 And using "Number needed to treat", one can pretty easily compare the effectiveness of psychotherapy with other evidence-based medical interventions and it compares pretty well - see figures from the Canadian Centre for Evidence-Based Medicine.  Also psychotherapy gets similar results to pharmacotherapy in the treatment of depression, but it's noteworthy that psychotherapy is better in the long term, so De Maat & colleagues in their paper "Relative efficacy of psychotherapy and pharmacotherapy in the treatment of depression: A meta-analysis" comment that "At follow-up relapse in pharmacotherapy (57%) was higher than in psychotherapy (27%)."  Additionally there is a growing research literature (Smith & Williams, 2013) highlighting reductions in medical & psychological treatment costs and reductions in time off work achievable with psychological interventions.

But this blog post is entitled "Psychotherapy is helpful but has developed shockingly poorly" - come on, what's not to like!?  Well quite a lot actually: 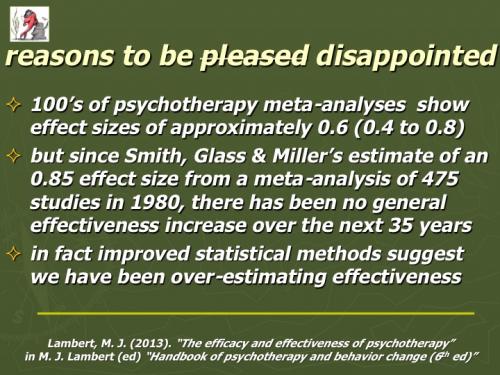 This does seem shocking to me ... that after decades of research involving huge amounts of time, money and some of the best brains of their generations, there has been no general increase in the how effective we are, as psychotherapists, at helping those who come to us suffering from a wide variety of psychological disorders. There has been so much work done developing different treatments for depression, but as Cuijpers & colleagues showed in their paper "Psychotherapy for depression in adults: a meta-analysis of comparative outcome studies" - when comparing "7 major types of psychological treatment for mild to moderate adult depression (cognitive-behavior therapy, nondirective supportive treatment, behavioral activation treatment, psychodynamic treatment, problem-solving therapy, interpersonal psychotherapy, and social skills training) ... there are no large differences in efficacy between the major psychotherapies for mild to moderate depression."  And in last year's paper "Psychotherapies for adult depression: recent developments", Cuijpers rubs this point in further - "In the past, many new psychotherapies have promised to be more effective than existing treatments, usually without success. We describe recent research on two new therapies, acceptance and commitment therapy and cognitive bias modification, and conclude that both have also not shown to be more effective than existing therapies."  In fact, to add insult to injury, if anything we seem to be getting worse in some areas.  So meta-analysis of effect sizes produced by CBT ... the most extensively researched psychological therapy for depression ... over the last three decades, suggests our results are deteriorating.  Here is a key chart from Johnsen & Friborg 2015 paper "The effects of cognitive behavioral therapy as an anti-depressive treatment is falling: A meta-analysis": 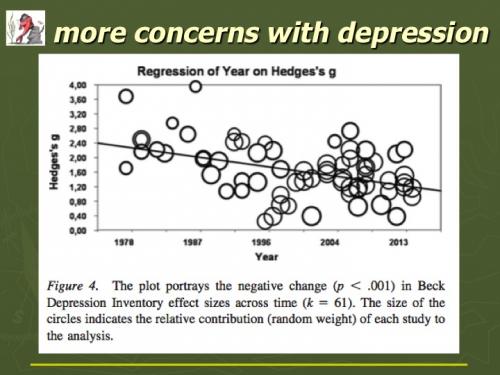 And the situation seems pretty much as bad for anxiety disorders.  Here again CBT is the most extensively researched treatment.  What do we know about any improvements in our results here?  Well it's not great: 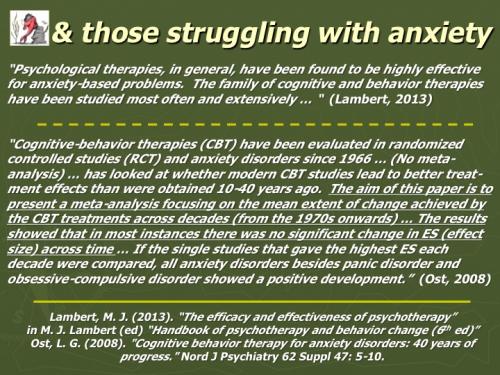 So Ost in his paper "Cognitive behavior therapy for anxiety disorders: 40 years of progress", wrote "The aim of this paper is to present a meta-analysis focusing on the mean extent of change achieved by the CBT treatments across decades (from the 1970s onwards) ... The results showed that in most instances there was no significant change in ES across time. In a few instances, the treatment effects were greater in modern studies. However, it was more common with a negative development, or a mixed development (first positive then negative or vice versa). There was no significant change in proportion of clinical improvement."

The title of this blog post is "Psychotherapy is helpful but has developed shockingly poorly over the last thirty years" ... and yup, that seems to be precisely what the research data shows.  For some suggestions what we can do about this state of affairs, see the next blog post in this sequence - "Some counsellors & psychotherapists are more effective than others".