I have just given a talk on "Recent research on non-drug treatments for bipolar disorder" to the Lothian branch of "Bipolar Scotland".  There is a description of the first part of the talk at "Non-drug treatments for bipolar disorder (1st post) - the value of psychotherapy" and you can download the full sequence of slides here.  Points touched on in the second part of the talk are illustrated below: 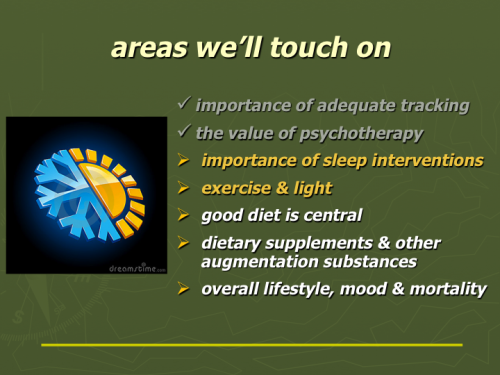 Sleep disturbance seems so ubiquitous in bipolar disorder and, as Bae & colleagues have shown - "Lifetime experiences of hypomanic symptoms are associated with delayed and irregular sleep-wake cycle and seasonality in non-clinical adult samples" - this linkage extends beyond people with full bipolar disorder. They conclude "Circadian and seasonal characteristics related to BD are also associated with a past history of hypomanic symptoms in non-clinical samples, especially "irritable/risk-taking" symptoms, suggesting the existence of subclinical presentation of BD and their biological traits."  Ng et al in last year's paper "Sleep-wake disturbance in interepisode bipolar disorder and high-risk individuals: a systematic review and meta-analysis" commented "Over the past decade, researchers have shifted focus from the manic and depressive episodes to the interepisode period in the study of sleep-wake disturbance in bipolar disorder ... our analyses suggest that adults with interepisode bipolar disorder appear worse than normal controls in most variables and comparable to adults with primary insomnia in certain aspects. Sleep onset latency, wake after sleep onset, and variability of sleep-wake variables were most consistently impaired in interepisode bipolar disorder."

And this sleep disturbance is associated with disorder severity, so just this year Cretu et al in "Sleep, residual mood symptoms, and time to relapse in recovered patients with bipolar disorder" wrote "Sleep disturbance in bipolar disorder (BD) is common during and between mood episodes. In recovered (euthymic at least two months) BD patients, we assessed sleep compared to controls and its relationships with residual mood symptoms and mood episode recurrence ... Eighty nine recovered BD patients compared to 56 healthy controls had significantly worse PSQI global score, more sleep medication use, longer sleep latency, and worse daytime dysfunction. PSQI global score had the greatest BD patient versus control effect size, and among BD patients, correlated significantly with residual mood symptoms and predicted earlier mood episode recurrence, even after covarying for residual mood symptoms."  The Pittsburgh Sleep Quality Index is a widely used questionnaire freely downloadable from the Pittsburgh University website.  Interestingly some recent research suggests that poor PSQI score may be more indicative of future difficulties for women than for men, with Saunders et al - "The effect of poor sleep quality on mood outcome differs between men and women: A longitudinal study of bipolar disorder" - commenting "Sleep disturbance is bi-directionally related to mood de-stabilization in bipolar disorder (BD), and sleep quality differs in men and women. We aimed to determine whether perception of poor sleep quality would have a different effect on mood outcome in men versus women ... In women, poor sleep quality at baseline predicted increased severity (B=0.28, p<0.001) and frequency of episodes (B=0.32, p<0.001) of depression, and poor sleep quality was a stronger predictor than baseline depression; poor sleep quality predicted increased severity (B=0.19, p<0.05) and variability (B=0.20, p<0.05) of mania, and frequency of mixed episodes (B=0.27, p<0.01).  In men, baseline depression and neuroticism were stronger predictors of mood outcome compared to poor sleep quality."  We need to be cautious about being too cavalier over sleep quality in men with bipolar disorder though.  The PSQI only measures subjective sleep complaints and, as pretty much always, these findings could do with replication before we take them too seriously.  Whichever way we look at it - it seems clear that sleep problems are widely distributed throughout the different phases of bipolar disorder and that they have clear relationships with the severity of the disorder's subsequent course.  Does this have treatment implications?

Yup, it sure looks like it does.  Before looking at psychological interventions for sleep problems in bipolar disorder, let me first underline the importance of considering possible sleep apnoea.  This is a disorder that's present in about 5% of the general adult population.  Soreca & colleagues studied a sequence of 72 overweight bipolar 1 sufferers - "Sleep apnea risk and clinical correlates in patients with bipolar disorder" - and reported that "Over half of this study population (54.1%) was found to be in the high-risk category for OSA. Participants at high risk for OSA scored significantly higher on measures of both depression and mania, even when sleep items were not counted in the total scores. Conclusions: Sleep apnea may be prevalent in patients with bipolar I disorder. Considering the substantial overlap of symptoms between OSA and depression and the potentially harmful effects of sleep disruption in patients with mood disorders, a systematic screening to assess prevalence and associated features of OSA in patients with bipolar disorder is warranted."

For me the key researcher here is Professor Allison Harvey at the delightfully named (yes it is the University of California) "Golden bear sleep & mood research clinic".