I've been interested in the development of Acceptance & Commitment Therapy (ACT) for a number of years.  There does seem a good deal to be said for it as an approach, with the underpinning evidence base growing steadily.  I have occasionally been a little put off by my sense that sometimes there's a slightly "cult" feel to it, but hey much the same can be said for associated mindfulness approaches ... and for sheer ferocity, some behaviourists take a bit of catching!  Lars-Goran Ost's "Efficacy of the third wave of behavioral therapies: A systematic review and meta-analysis" challenged ACT adherents to up the quality of their research efforts ... much as his paper "Cognitive behavior therapy for anxiety disorders: 40 years of progress" challenged more standard CBT workers to take a critical look in the mirror at their own efforts.

I've enjoyed some ACT-linked research that has already emerged this year.  I thought Fledderus et al's paper "Acceptance and commitment therapy as guided self-help for psychological distress and positive mental health: a randomized controlled trial" was particularly interesting, while Bastian & colleagues' demonstration in "Feeling bad about being sad: the role of social expectancies in amplifying negative mood" that " ... when people perceive that others think they should feel happy, and not sad, this leads them to feel sad more frequently and intensely" certainly fits with ACT's emphasis on "acceptance".  Chen et al's "shift-and-persist" model bears a good deal of resemblance to ACT ideas - see "Protective factors for adults from low-childhood socioeconomic circumstances: The benefits of shift-and-persist for allostatic load."  And this is especially the case when one realises that acceptance/mindfulness is less distinct from reappraisal responses than one might initially think - see "Positive reappraisal mediates the stress-reductive effects of mindfulness: An upward spiral process."  But there is also recent work suggesting one should pause before adopting too much of a one-size-fits-all approach -  "Acceptance-versus change-based pain management".

With psychotherapy, I'm a big fan of trying to quantify (at least to some extent) where one is starting from and what progress one is making - so last year's paper updating the widely used ACT "Acceptance and Action Questionnaire (AAQ)" triggered my interest.  The paper, by Frank Bond, Steve Hayes, Ruth Baer & colleagues, is entitled "Preliminary psychometric properties of the Acceptance and Action Questionnaire-II: A revised measure of psychological inflexibility and experiential avoidance" and its abstract reads "The present research describes the development and psychometric evaluation of a second version of the Acceptance and Action Questionnaire (AAQ-II), which assesses the construct referred to as, variously, acceptance, experiential avoidance, and psychological inflexibility. Results from 2,816 participants across six samples indicate the satisfactory structure, reliability, and validity of this measure. For example, the mean alpha coefficient is .84 (.78-.88), and the 3- and 12-month test-retest reliability is .81 and .79, respectively. Results indicate that AAQ-II scores concurrently, longitudinally, and incrementally predict a range of outcomes, from mental health to work absence rates, that are consistent with its underlying theory. The AAQ-II also demonstrates appropriate discriminant validity. The AAQ-II appears to measure the same concept as the AAQ-I (r=.97) but with better psychometric consistency."  The AAQ-II is free to use - with acknowledgement of its source - and is delightfully succinct: 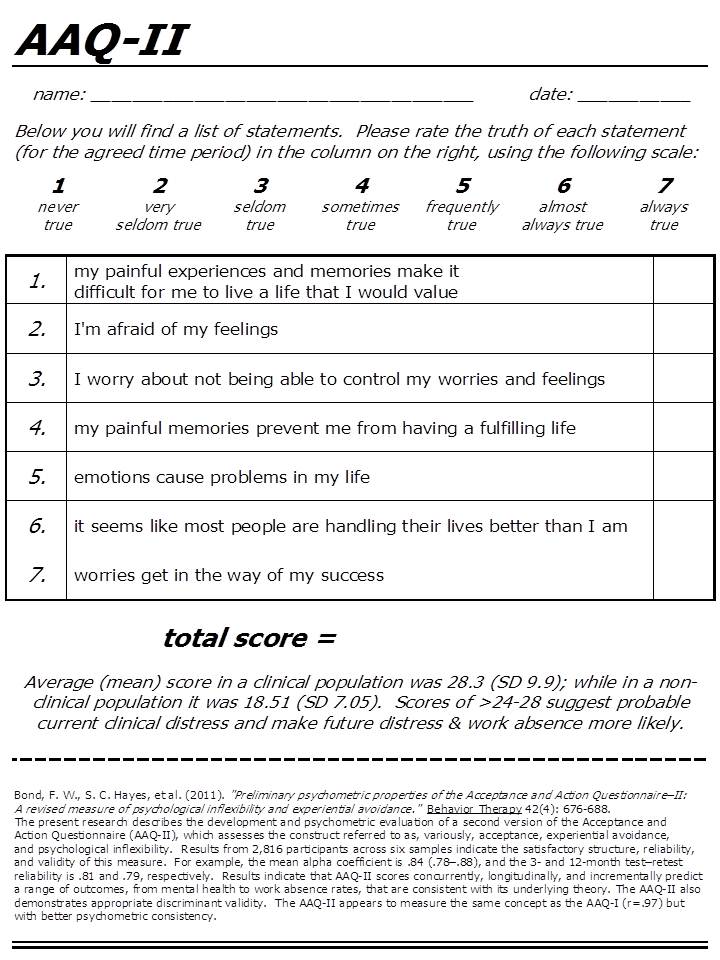 (This questionnaire is downloadable both as a Word doc and as a PDF file ).

A good way for keeping an eye on how one's doing with the "The bus driver metaphor" ...