I wrote yesterday about the importance of processing "hot cognitions" and feelings.  In today's post I aim to to drill down more into the emotional evocation and processing of chair work. "Two chair work for conflict splits" is often relevant, Robert Elliott suggested in this Emotion-focused therapy workshop, when clients display a.) Two wishes or action tendencies. b.) There is description of a contradiction or conflict. c.) A sense of struggle or coercion is expressed. This pattern is obviously observed when there is conflict over a decision that needs to be made. Typically there's a sense of uncomfortable "tornness". These conflicts may also emerge, Robert pointed out, as self-evaluative splits (self-criticism) in depression, as coaching splits for example with studying & lifestyle (self-coercion), and as attribution splits - often seen in social anxiety (externalized, over-reaction to others). There are many potential clinical applications, including for depression, borderline processes, substance abuse, PTSD, and anxiety disorders. Interestingly a very recent paper also suggests this approach's potential relevance for eating disorders too - "'It's like there are two people in my head': A phenomenonological exploration of anorexia nervosa and its relationship to the self". For me, with my primary training being cognitive-behavioural, it's fascinating to consider the great breadth of possible application of this two chair method. It can certainly respond to John Teasdale's plea to work more with "hot cognitions" and CBT is so frequently concerned with competing beliefs about distressing situations. There seems so much work out there already on the use of this kind of two chair work specifically for self-attacking, self-critical splits - for example Paul Gilbert's Compassionate Mind Training approach or EFT developments as described in the book "Emotion-focused therapy for depression". I'm really interested, as well though, in exploring this two chair approach when working with the internal "self-scarer" voice one finds so often with anxiety disorders. I haven't seen much published on this. It feels interesting. I like too the approach's potential application for "coaching splits". Robert demonstrated this method with a course member volunteer. Then when we came to move into small groups for practice, I too worked "as client" on a personal "coaching split". It has been helpful. Great.

Robert pointed us in the direction of his co-authored book "Learning emotion-focused therapy" for extending the material covered in this afternoon seminar. There are also many relevant research studies. One that I find particularly interesting and helpful is Missirlian & colleagues' paper "Emotional arousal, client perceptual processing, and the working alliance in experiential psychotherapy for depression" where the authors found that it was a combination of emotional arousal in conjunction with perceptual processing that was particularly predictive of better therapeutic outcome. Emotional arousal and perceptual processing were measured separately. The arousal measure I haven't come across before and it chimes well with my strong sense of how voice quality tells us so much about depth of emotional connection. The researchers used the Client Emotional Arousal Scale-III (CEAS-III) which "assesses the quality and intensity of client emotions based on evaluation of the client's degree of arousal from voice and body and the degree of restriction of expression. In this rating, an "emotional voice" ... is characterized by "an overflow of emotion into a speech pattern" and can be detected by attending to the following aspects: accentuation pattern, regularity of pace, terminal contours, and whether there has been a disruption of speech patterns. CEAS-III assessment is divided into two parts: First, the client's primary emotion is identified; second, the overall level of intensity of the client's primary emotion (modal intensity) as well as the peak intensity, or intensity of the maximally aroused moment, are rated ... ratings are based on a 7-point scale, where upper levels indicate higher arousal intensities (e.g., 1. Client does not express emotions. Voice or gestures do not disclose any emotional arousal; 4. Arousal is moderate in voice and body. Emotional voice is present; ordinary speech patterns are moderately disrupted by emotional overflow as represented by changes in accentuation patterns, unevenness of pace, changes in pitch. Although there is some freedom from control and restraints, arousal may still be somewhat restricted; 7. Arousal is extremely intense and full in voice and body. Usual speech patterns are completely disrupted by emotional overflow. Arousal appears uncontrollable and enduring. There is a falling apart quality)."  Mm ... you can get the picture. This is certainly John Teasdale's "hot cognition" territory.

Meanwhile processing was measured using the "Levels of Client Perceptual Processing (LCPP)" method which "assesses the way in which clients process their experiences in therapy. The LCPP consists of seven mutually exclusive categories, each category representing a particular kind of mental operation: (I) recognition, (II) elaboration, (III) externally focused differentiation, (IV) analytic differentiation, (V) internally focused differentiation, (VI) reevaluation, and (VII) integration. Levels I-III of the LCPP are representative of automated, or a nonreflective mode of processing, whereas Levels IV-VII represent a deliberate or controlled and reflective manner of processing". The expectation is that a deep internally focused, differentiation & reevaluative integration of one's strongly felt emotional experience can be particularly helpful. Pascual-Leone & Greenberg revisited this territory in their paper "Emotional processing in experiential therapy: Why "the only way out is through"." They reported "The purpose of this study was to examine observable moment-by-moment steps in emotional processing as they occurred within productive sessions of experiential therapy. Global distress was identified as an unprocessed emotion with high arousal and low meaningfulness ... The qualitative findings produced a model showing: global distress, fear, shame, and aggressive anger as undifferentiated and insufficiently processed emotions; the articulation of needs and negative self-evaluations as a pivotal step in change; and assertive anger, self-soothing, hurt, and grief as states of advanced processing ... A multivariate analysis of variance showed that the model of emotional processing predicted positive in-session effects and ... that distinct emotions emerged moment by moment in predicted sequential patterns." I think I've been guilty sometimes of using chair work a bit like "a sausage processing machine" - set up the conflict dialogue, follow the therapist do-it-yourself instructions, and bingo out comes the positive therapeutic response. This point of view isn't totally bad. The following diagram illustrates a simplified "cookery" model of two chair work: 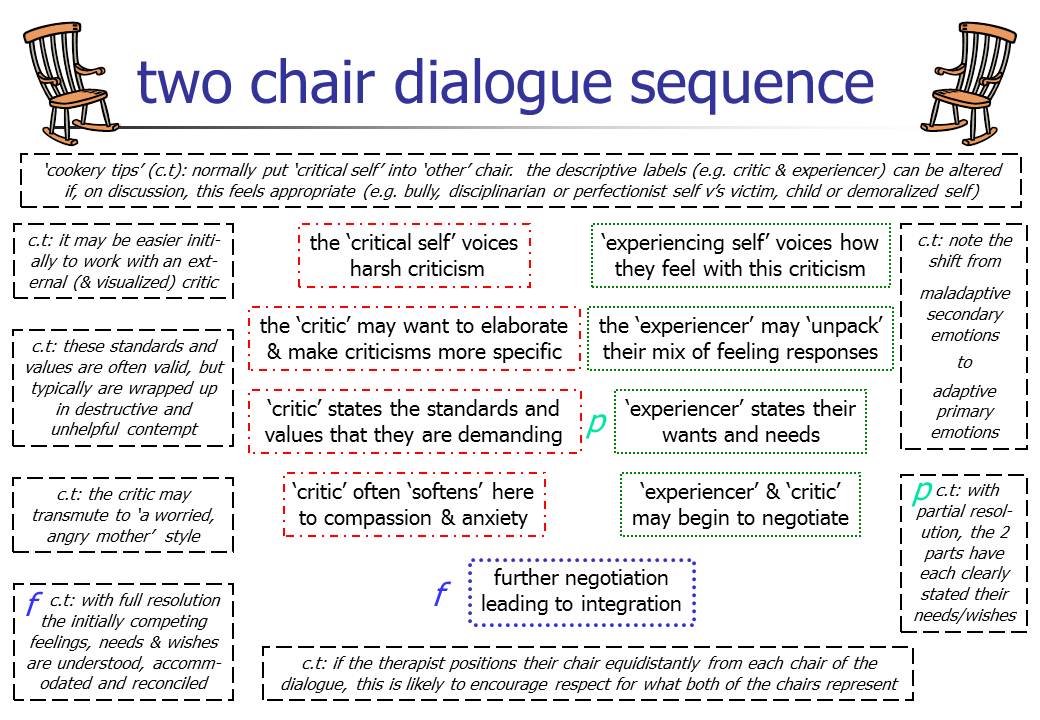 (This diagram is downloadable both as a PDF file and as a Powerpoint slide).

This flow chart is helpful, but it's useful too to keep a broader sense of what this work is probably about.  Emotional arousal signals what's important to us.  Often in group work one sees this - it's as though the group is an electrical circuit and when someone is personally touched by what's happening, one can see them light up like an electric bulb.  Same in one-to-one work or in life more generally.  Noticing when emotion bubbles up is a royal road to material that's likely to be significant.  And being able to notice, stay with, articulate and "unpack" the emotions gives us access to meaning.  It's a bit like say the London underground map.  Emotional arousal lights up parts of the map.  Seeing what lights up, the intensity, the extent, the mix of colours, the interconnections - this perceptual processing allows clearer meanings to emerge, reappraisals to occur, integration to develop.  Arousal and processing: lighting up and observing/expressing/learning: key ingredients, held in the safe bowl of a caring (therapeutic) relationship.  And as shown in the Pascal-Leone study (above) this work encourages " ... global distress, fear, shame, and aggressive anger as undifferentiated and insufficiently processed emotions" via "the articulation of needs and negative self-evaluations as a pivotal step in change" to shift to "assertive anger, self-soothing, hurt, and grief as states of advanced processing."

So partly, in two chair work, it's as if we very deliberately stand in front of the "London underground map" and have the courage to allow emotion to light up key areas that really matter to us.  This involves emotional awareness & regulation - mentioned as two of the four key emotional processes in Greenberg & Pascual-Leone's paper, or the identification & regulation described as two of four core emotional competencies by Nelis & colleagues.  This isn't easy.  Those who suffer from depression often have difficulty really looking at the emotionally coloured detail of what may have contributed to their vulnerability - see for example the recent papers "Overgeneral autobiographical memory as a predictor of the course of depression: A meta-analysis" and "Negative intrusive memories in depression: The role of maladaptive appraisals and safety behaviours."  One sees related processes too with trauma so, in their article "Characteristics and organization of the worst moment of trauma memories in posttraumatic stress disorder", Jelinek et al commented "It has been proposed that the organization of the worst moment in traumatic memories ("hotspots") is of particular importance for the development of PTSD. However, current knowledge regarding the organization and content of worst moments is incomplete. In the present study, trauma survivors with (n=25) and without PTSD (n=54) were asked to indicate the worst moment of their trauma and to give a detailed narrative of the traumatic event. The worst moment and the remaining narrative were analyzed separately with regard to organization and emotional content. Results indicated that worst moments of trauma survivors with PTSD differed from the remaining narrative and from worst moments described by trauma survivors without PTSD in that they were characterized by more unfinished thoughts, more use of the present tense and lower levels of cognitive processing."  And this brings us to the need for "perceptual processing" to digest the raw materials thrown up through emotional awareness.  It's not typically enough for emotional arousal to light up the map, and emotional regulation to allow us to keep looking at the picture that emerges.  We also need Greenberg & Pascal-Leone's third & fourth key emotional processes - "active reflection on emotion (meaning making), and emotional transformation" - and the last two of Nelis et al's core emotional competencies - "understanding ... and utilization."  Maybe this is partly why Greenberg & colleagues found, in their study, that "An optimal frequency (25%) of highly aroused emotional expression was found to relate to outcome, with deviation from this optimal frequency predicting poorer outcome. Conclusions: Too much or too little emotion was found to be not as helpful as a moderate amount."  We need time to heat up the therapeutic meal, but also we need time to chew it over and digest it.  Thoughtful use of two chairs methods can be very helpful with this - both the dialogue sequence itself and, very importantly, then discussing, maybe writing about, and acting on the understandings that emerge.

We're looping back to the first of this three post series - on narrative therapy and trauma processing - where we emphasised that "successful psychotherapy entails the articulation, revision, and deconstruction of clients' maladaptive life stories in favor of more life-enhancing alternatives".  Precious work.  As the great poet Rilke wrote "Perhaps all the dragons in our lives are princesses who are only waiting to see us act, just once, with beauty and courage.  Perhaps everything that frightens us is, in its deepest essence, something helpless that wants our love."