If a pickpocket meets a saint, all he sees are his pockets

The intriguing additional value of understanding social networks through a social identity lens is highlighted and a wealth of emerging research validating the importance of this approach is introduced.

In this third section of the book chapter on 'Social networks', I introduce Social identity theory and the helpful way this lens expands still further our understanding of how personal social networks are associated with such major health & wellbeing benefits and what we can do about this.  As the great social psychologist Kurt Lewin put it - "There's nothing so practical as a good theory." 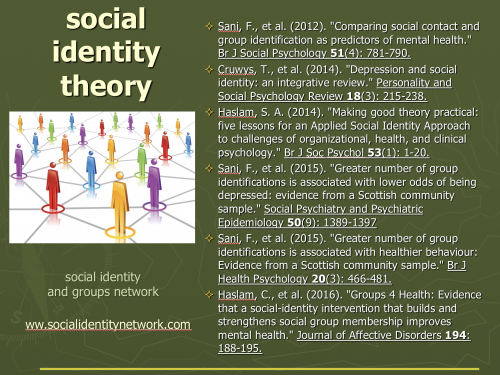 So it looks like group identification is important for health.  What does this mean for how best we can look after our personal wellbeing and help our clients?  These issues are addressed in Alexander Haslam's article "Making good theory practical: Five lessons for an Applied Social Identity Approach to challenges of organizational, health, and clinical psychology" which abstracts five core lessons from the research: "(1) Groups and social identities matter because they have a critical role to play in organizational and health outcomes. (2) Self-categorizations matter because it is people's self-understandings in a given context that shape their psychology and behaviour. (3) The power of groups is unlocked by working with social identities not across or against them. (4) Social identities need to be made to matter in deed not just in word. (5) Psychological intervention is always political because it always involves some form of social identity management. Programmes that seek to incorporate these principles are reviewed and important challenges and opportunities for the future are identified."  Meanwhile, Cruwys & colleagues in their 2014 paper "Depression and social identity: An integrative review" state "Social relationships play a key role in depression. This is apparent in its etiology, symptomatology, and effective treatment. However, there has been little consensus about the best way to conceptualize the link between depression and social relationships. Furthermore, the extensive social-psychological literature on the nature of social relationships, and in particular, research on social identity, has not been integrated with depression research. This review presents evidence that social connectedness is key to understanding the development and resolution of clinical depression. The social identity approach is then used as a basis for conceptualizing the role of social relationships in depression ... and to translate the insights of this approach into clinical practice."

And staying with this theme of improving our treatment of depression, a paper last year from here in Scotland - "Greater number of group identifications is associated with lower odds of being depressed: evidence from a Scottish community sample" - stated "Group identification has been shown to be associated with reduced risk of depression, but this research has important limitations. Our aim was to establish a robust link between group identification and depression whilst overcoming previous studies’ shortcomings.  Methods 1,824 participants, recruited from General Practice throughout Scotland, completed a questionnaire measuring their identification with three groups (family, community, and a group of their choice), as well as their intensity of contact with each group. They also completed a self-rated depression measure and provided demographic information. Their medical records were also accessed to determine if they had been prescribed antidepressants in the previous 6 months.  Results The number of group identifications was associated with both lower self-rated depression and lower odds of having received a prescription for antidepressants, even after controlling for the number of contact-intensive groups, level of education, gender, age, and relationship status.  Conclusions Identifying with multiple groups may help to protect individuals against depression. This highlights the potential importance of social prescriptions, where health professionals encourage a depressed patient to become a member of one or more groups with which the patient believes he/she would be likely to identify."

Then, using the same Scottish sample, the research team also showed "Greater number of group identifications is associated with healthier behaviour", commenting "This paper investigates the interplay between group identification (i.e., the extent to which one has a sense of belonging to a social group, coupled with a sense of commonality with in-group members) and four types of health behaviour, namely physical exercise, smoking, drinking, and diet. Specifically, we propose a positive relationship between one's number of group identifications and healthy behaviour. Design This study is based on the Scottish portion of the data obtained for Wave 1 of the two-wave cross-national Health in Groups project. Totally 1,824 patients from five Scottish general practitioner (GP) surgeries completed the Wave 1 questionnaire in their homes. Methods Participants completed measures of group identification, group contact, health behaviours, and demographic variables. Results Results demonstrate that the greater the number of social groups with which one identifies, the healthier one's behaviour on any of the four health dimensions considered. Conclusions We believe our results are due to the fact that group identification will generally (1) enhance one's sense of meaning in life, thereby leading one to take more care of oneself, (2) increase one's sense of responsibility towards other in-group members, thereby enhancing one's motivation to be healthy in order to fulfil those responsibilities, and (3) increase compliance with healthy group behavioural norms. Taken together, these processes amply overcompensate for the fact that some groups with which people may identify can actually prescribe unhealthy behaviours."

It's so intriguing - and research on the value of looking at social networks through a social identity lens continues to flourish.  And this has been usefully applied to young people - "Identification with social groups is associated with mental health in adolescents" - old people - "Social group memberships in retirement are associated with reduced risk of premature death" - and pretty much everyone in between - "Advancing the social identity approach to health and well‐being".

(You can download a version of this page "Social relationships ... and health: background" as a Word doc or as a PDF file.)