Recent psychedelic research: their use in psychotherapy (1st post)

"Those who do not have the power over the story that dominates their lives - the power to retell it, reexperience it, deconstruct it, joke about it, and change it as times change - truly are powerless because they cannot think new thoughts."   Salman Rushdie

The first post in this series is "Recent psychedelic research: an introduction".  There are also further posts on "Their use in psychotherapy (2nd post)", "How do they work?", "What are the risks?", "Their use in the general population", "Psychedelics and end of life distress", "Re-mining personal experience" and "Recent psychotherapy research: further exploration".  In this post, I want to look at the central theme of how psychedelics can best be used when integrated with psychotherapy.  First I'll talk a little about results with the diverse groups of substances that can usefully be thought of as psychoplastogens - see David Olson's paper "Psychoplastogens: A promising class of plasticity-promoting neurotherapeutics".  Secondly I'll focus more on a subset of these agents - the classic psychedelics, and thirdly I'll look a little at the various ways classic psychedelics might be integrated with psychotherapy.  In this post, I'll talk more about early research on psychedelic-assisted psychotherapy, while in the next post I'll focus more on recent & emerging work.  This is important territory that may well significantly change the treatment landscape for a wide variety of psychological disorders in the next decade.  Of course this is relevant for psychiatrists, but we're also looking at developing forms of psychedelic-assisted psychotherapy that are likely to increasingly affect the thinking and potentially the practice of large numbers of psychologists & counsellors.  Obviously this is relevant too for those who suffer from, or are close to someone who suffers from, hard-to-treat psychological difficulties - hence these developments are important for a large proportion of the general population.

However before I write in more detail about these issues, what's my current overall take on the potential value of psychoplastogens/psychedelics for psychological difficulties?  I give this opinion as someone who has worked for decades as a medical doctor and psychotherapist, as someone who has a personal & growing database of a couple of hundred recent academic articles already on this subject area, and as someone who has personal experience of psychedelic trips.  My current take is one of cautious optimism.  It's usual with potentially major new therapeutic advances to find that initial pilot studies done by enthusiasts produce startling results that don't hold up adequately when replicated in larger, randomised, double-blind studies by other research groups.  I expect to see this to an extent with research on psychedelics.  However, even if results are only 50% as effective as some pilot studies currently report, this is still likely to be of importance.  And I'm confident that the areas where psychedelics are recognised as potentially facilitating helpful therapeutic change will expand.  These are exciting times.  Caution, scientific rigour, determination, engaged compassion ... all are needed to help these advances ease suffering as fully as possible.

And going into more detail ... firstly something about therapeutic outcomes being achieved with the various groups of substances that can be viewed as psychoplastogens.  Sherwood & Prisinzano discuss this in their paper "Novel psychotherapeutics – a cautiously optimistic focus on hallucinogens", with the abstract commenting "Disrupted mental health affects up to one in three individuals globally and is an unmet medical challenge contributing to individual suffering as well as significant societal and economic burden. In response to the stalled development of new drugs and a greater than ever need for novel therapies to treat psychiatric illness, the last two decades have seen renewed scientific and medical receptiveness to the idea of treating several mental disorders with drugs commonly known as hallucinogens.  ‘Hallucinogens,’ in a general sense, define a vast and diverse set of molecules that elicit significant alteration in human consciousness by acting on targets in the central nervous system, temporarily rerouting synaptic transmission in the brain. Commonly accepted classes of hallucinogens include psychedelics, entactogens, dissociatives, and atypical hallucinogens that include deliriants, cannabinoids, and kappa opioids. Each class possesses its own unique attributes and subclasses as well as some degree of overlap with regard to perceived effects, pharmacology, and/or potential therapeutic utility.  The therapeutic use of hallucinogens represents a potentially new paradigm in the way medicine understands and treats psychiatric illnesses. While the pharmacological diversity of hallucinogens is vast, a fascinating common phenomenon has been observed in their therapeutic utility: a single acute exposure to the hallucinogenic agent can elicit an immediate and lasting improvement in symptoms for the patient, an effect that persists long after the drug is metabolized and gone from the body.  This is in contrast to current pharmacotherapies used to treat mental disorders, such as selective serotonin reuptake inhibitors (SSRIs), which are based on a therapeutic model that attempts to alleviate symptoms by re-equilibrating the steady-state levels of serotonin in the brain using a chronic dosing regimen of the drug."

These authors then go on to discuss ketamine and MDMA as well as the classic psychedelics (DMT, LSD, mescaline & psilocybin).  The dissociative ketamine's ability to produce rapid antidepressive effects (via infusion) are exciting, well-documented, and a bit impractical (however this latter difficulty is changing with new methods of intake) ... and there are concerns too about its abuse potential.  For more on this drug, see for example "Ketamine for treatment-resistant depression: A new advocate", "The dissociative psychedelic renaissance", "Ketamine treatment and global brain connectivity in major depression" and the interesting "Does oral administration of ketamine accelerate response to treatment in major depressive disorder? Results of a double-blind controlled trial" & "Repeated oral ketamine for out-patient treatment of resistant depression: randomised, double-blind, placebo-controlled, proof-of-concept study".  While for the entactogen MDMA there's all the excitement about its use for PTSD - see "Current perspective on MDMA-assisted psychotherapy for posttraumatic stress disorder", "Treating posttraumatic stress disorder with MDMA-assisted psychotherapy: A preliminary meta-analysis and comparison to prolonged exposure therapy" and "3,4-methylenedioxymethamphetamine as a psychiatric treatment" - with the latter paper suggesting we may see MDMA available on prescription for PTSD by 2021.  Interestingly, as with other psychedelics, it seems that increases in the personality trait of openness may partially mediate therapeutic benefits - see "Therapeutic effect of increased openness: Investigating mechanism of action in MDMA-assisted psychotherapy" - and this could herald other applications for MDMA beyond just PTSD.

These are very interesting findings, but the main focus of this series of blog posts I'm writing on psychoplastogens is on the classic psychedelics (DMT, LSD, psilocybin & mescaline).  Where has research on therapeutic applications got to with these substances?  Personal observations date back over 120 years with Weir Mitchell writing about his experience taking mescaline in the British Medical Journal of 1896.  And over 80 years ago - in 1936 - Guttman published his exploration of this drug with a series of subjects in his paper "Artificial psychoses produced by mescaline".  Rucker & colleagues in their excellent 2018 publication "Psychiatry & the psychedelic drugs. Past, present & future" comment "Erich Guttman, then working at The Maudsley Hospital in London, United Kingdom, raised the possibility of a therapeutic effect of mescaline ... not publishing any sort of objective results, he nonetheless made the first observation of the potential therapeutic utility of the mescaline-induced state in psychotherapy."  The Rucker paper goes on to review "Pre-prohibition clinical studies" under the sub-headings "1895-1940. Studies with mescaline", "1940-1970. Studies with psychotic disorders", "1940-1970. Studies with neurotic disorders" & "1940-1970. Studies with alcoholism".  The authors comment that "Studies of the clinical utility of psychedelics published prior to 1970 were, like many studies of that time, methodologically sub-optimal ... Nonetheless, the pre-prohibition research strongly suggested that psychedelic drugs were not useful for those with established psychotic disorders and should probably be avoided in those liable to develop them ... Reports were more encouraging in trials with so-called 'psychoneurotic disorders', a term which covers a wide variety of anxious, obsessive and depressive states.  We have systematically reviewed trials in broadly defined unipolar mood disorder in another work, which showed that nearly 80% of participants in these trials were judged to have 'improved' by their clinicians - see "Psychedelics in the treatment of unipolar mood disorders: a systematic review".  For "Studies with alcoholism (pre-1970)", the authors hightlight Krebs & Johansen's paper "Lysergic acid diethylamide (LSD) for alcoholism: meta-analysis of randomized controlled trials", which reported "We identified six eligible trials, including 536 participants. There was evidence for a beneficial effect of LSD on alcohol misuse (OR, 1.96; 95% CI, 1.36–2.84; p = 0.0003). Between-trial heterogeneity for the treatment effects was negligible (I2 = 0%). Secondary outcomes, risk of bias and limitations are discussed. A single dose of LSD, in the context of various alcoholism treatment programs, is associated with a decrease in alcohol misuse."

Other overviews of these early research activities include Grinspoon & Bakalar's much cited 1981 paper "The psychedelic drug therapies", where the authors comment "Between 1950 and the mid-1960s there were more than a thousand clinical papers (discussing 40,000 patients), several dozen books, and six international conferences on psychedelic drug therapy. Almost all publication and most therapeutic practice in this field have now come to an end, however, as much because of legal and financial obstacles as because of loss of interest."   There was a devastating effect on research caused by the scientific censorship of reclassifying psychedelics as Schedule 1 drugs in the US in 1970 (and the knock-on effects to other countries) ... so for largely political reasons dramatically reducing study of their potential value.  The slide below on the knock-on effect on psilocybin research is taken from a lecture by Professor David Nutt at the 2015 Edinburgh Science Festival: 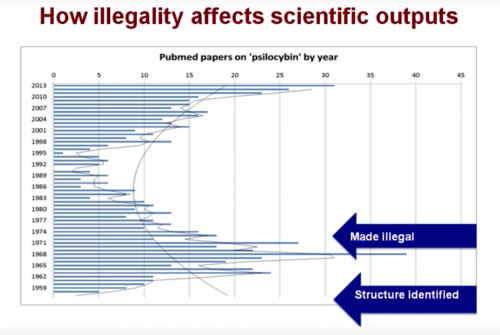 What the slide above also illustrates though is the exciting modern resurgence in research interest.  Rucker & colleagues write "Since 2006, there have been several pilot trials and randomised controlled trials using psychedelics (mostly psilocybin) in various non-psychotic psychiatric disorders. These have provided encouraging results that provide initial evidence of safety and efficacy, however the regulatory and legal hurdles to licensing psychedelics as medicines are formidable."  There is such a vast growing ocean of worldwide mental health suffering, including depression, anxiety, eating disorders, PTSD, alcohol & tobacco dependency and other drug addicitions.  Our current treatments ... using medication and psychotherapy ... have not become much more effective for decades, and there are too few genuinely new emerging developments.  If there is even a small chance that psychedelics could help with these huge challenges, it is inhumane & stupid not to explore what good they can do.  In the next post I will look at what recent emerging research is beginning to show.