Personal directions in mindfulness teaching: should we really only be training mindfulness for diverse group populations?

I wrote an initial blog post in May entitled "Personal directions in mindfulness teaching: an overview" where I said that I was "excited, stimulated, happy, frustrated, challenged, and hopeful" about the current surge of interest in mindfulness and introduced the following diagram: 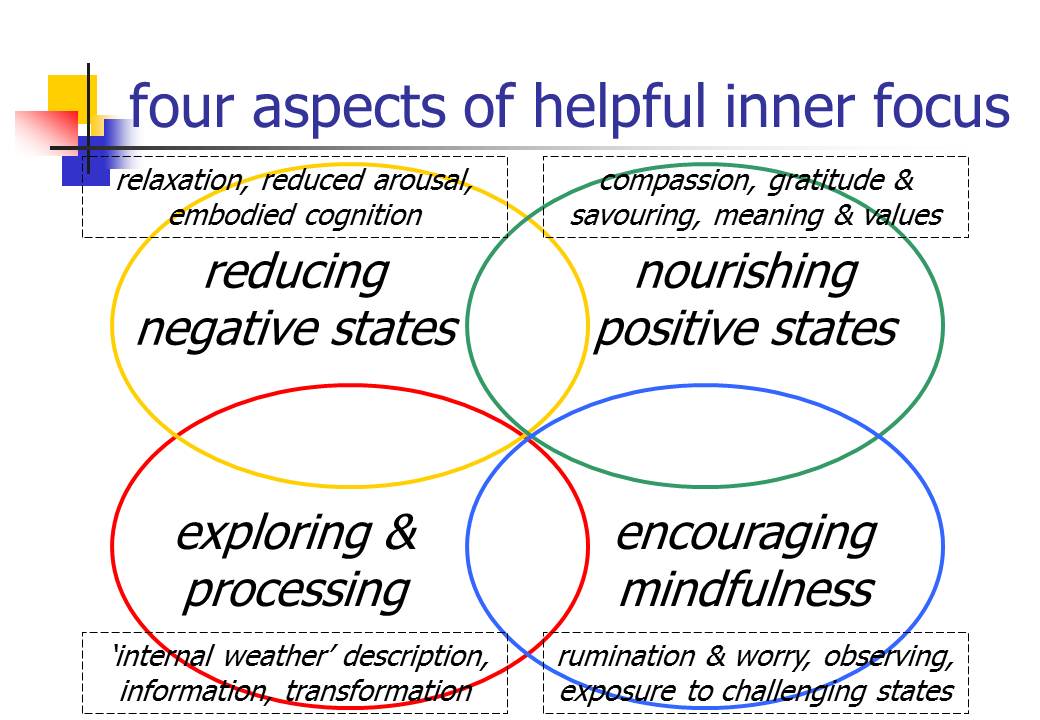 (This diagram is downloadable both as a PDF file and as a Powerpoint slide).

I ended last time's post on "Personal directions in mindfulness teaching" with the comment that I intended to "write a series of blog posts over the summer discussing these areas (see above), looking at the evidence underpinning why it might make sense to approach practice & teaching in these adapted ways, and exploring what this might involve in terms of actual meditation methods."

So in what ways do I want to adapt current standard MBSR/MBCT practice & teaching?  I'd like to make six points here.  1.) Content is not sacrosanct.  2.) Monitoring participants' engagement & progress during training makes excellent sense.  3.) Encouraging relaxation as well as mindfulness is currently the evidence-based way to go.  4.) Teaching an accepting, compassionate stance is important.  5.) These skills can also promote emotional intelligence.  6.) Integration with value-directed activation & challenging avoidance looks good too.

Enlarging on these points a bit more.  1.) Content is not sacrosanct.  The current flowering of research interest in mindfulness & acceptance processes sometimes gives the impression that these ways of responding to psychological distress are head & shoulders above other methods.  I would argue that mindfulness/acceptance is a great addition to a whole series of potentially useful psychological & self-care practices, but it's no more than "a useful addition".  Remember that mindfulness based cognitive therapy (MBCT) was developed as a way of helping people, who have already suffered from three or more previous episodes of major depression, reduce their vulnerability to future relapse.  This is the evidence-based indication highlighted in the National Institute of Health & Clinical Excellence (NICE) guideline.  People who suffer repeated episodes of depression (rather than two or less previous episodes) may well be vulnerable to different kinds of depressive process - specifically it seems as though a tendency to tumble into ruminative thinking is of particular importance in recurrent depression.  John Teasdale & colleagues saw MBCT as a very good way of targeting this vulnerability to rumination - see, for example, their 1995 paper "How does cognitive therapy prevent depressive relapse and why should attentional control (mindfulness) training help?"  Remember that, in both key early research studies showing that MBCT reduced depressive relapse, these benefits were only found in people who had already suffered three or more episodes of depression.  So in the first ground-breaking study published in 2000, they stated "For patients with only 2 previous episodes, MBCT did not reduce relapse/recurrence" and the abstract of the 2004 replication went further, pointing out that (although numbers involved were small) undergoing MBCT was actually associated with worse recurrence rates for people who had only suffered two or less previous depressive episodes.  The authors went on to state "MBCT was most effective in preventing relapses not preceded by life events."  Even in this year's exciting paper by van Aalderena & colleagues showing that MBCT can help people suffering from current depression as well as reducing risk of relapse - even in this paper - all patients (whether currently depressed or not) had previously experienced at least three depressive episodes.

These kinds of findings lead me to worry a bit about the blanket application of mindfulness training to a very wide-ranging mix of participants.  It's encouraging that the recent "Meditative therapies for reducing anxiety: a systematic review and meta-analysis of randomized controlled trials" reported benefits, but cautiously so - "This review demonstrates some efficacy of meditative therapies in reducing anxiety symptoms, which has important clinical implications for applying meditative techniques in treating anxiety. However, most studies measured only improvement in anxiety symptoms, but not anxiety disorders as clinically diagnosed."  And the results don't appear any better than outcomes reported for diverse relaxation methods - see "Relaxation training for anxiety: a ten-years systematic review with meta-analysis".  Remember mindfulness in MBCT has been honed as a response to ruminative vulnerability.  Rumination itself is not such a straightforward concept - see, for example, Smith & Alloy's "A roadmap to rumination: a review of the definition, assessment, and conceptualization of this multifaceted construct" with its conclusion that "In sum, this review highlights some of the important similarities and differences between the many models and conceptualizations of rumination in the literature. It is suggested here that consideration of rumination as a characteristic, experientially avoidant emotion regulation strategy that arises in response to perceived discrepancies between desired and actual status is most appropriate" and their point that "rumination ... has been related to decrements in problem-solving, this is likely an important link between theories of rumination and is compatible with an experiential avoidance view in that avoidance of emotional material will likely impede effective generation of solutions".  With this avoidant emotion regulation strategy view of rumination, it isn't surprising that an emotion approach technique like expressive writing might be of value - see Gortner et al's "Benefits of expressive writing in lowering rumination and depressive symptoms" and Sloan et al's "Expressive writing buffers against maladaptive rumination".  Nor is it surprising that problem solving therapy is one of the best supported interventions for depression - see "Psychotherapy for depression in adults: a meta-analysis of comparative outcome studies" - with further research (Oxman et al, 2008) suggesting particular benefit for those with avoidant coping styles.  So I repeat - I would argue that mindfulness/acceptance is a great addition to a whole series of potentially useful psychological & self-care practices, but (on current evidence) it's no more than "a useful addition".

It's not hard to see why I have concern about prioritising mindfulness in group interventions for more general psychological distress.  I just don't think the evidence suggests that it is THE strategy to be prioritising.  I think it's a good strategy but, at the present stage of research, no more than that.  A real weakness of current research on mindfulness is that nearly all studies demonstrating benefits have simply compared mindfulness training with "waiting list" or "treatment as usual" groups.  What this means is that we're unclear how much mindfulness training produces its undoubted benefits through training people to be more mindful, and how much the benefits come from more non-specific effects like encouragement of hope, a structured understandable path forward, trainer warmth and confidence, support from being in a group, and so on.  A paper by MacCoon et al. published this year - "The validation of an active control intervention for mindfulness based stress reduction (MBSR)" - gives cause for concern, with its abstract reading "Most of the extant literature investigating the health effects of mindfulness interventions relies on wait-list control comparisons. The current article specifies and validates an active control condition, the Health Enhancement Program (HEP), thus providing the foundation necessary for rigorous investigations of the relative efficacy of Mindfulness Based Stress Reduction (MBSR) and for testing mindfulness as an active ingredient. 63 participants were randomized to either MBSR (n=31) or HEP (n=32) ... There were significant improvements over time for general distress (η2=.09), anxiety (η2=.08), hostility (η2=.07), and medical symptoms (η2=.14), but no effects of intervention. Practice was not related to change. HEP is an active control condition for MBSR while remaining inert to mindfulness ... Participant-reported outcomes (PROs) replicate previous improvements to well-being in MBSR, but indicate that MBSR is no more effective than a rigorous active control in improving these indices. These results emphasize the importance of using an active control condition like HEP in studies evaluating the effectiveness of MBSR."  Now it's very likely that part of the benefits produced by the active control condition - the Health Enhancement Program (HEP) - were due to specific therapeutic effects from the program's components (physical exercise, nutritional advice & music therapy).  However it's very unlikely that HEP's benefits were anything to do with increased mindfulness.

I remember having a conversation with Mark Williams some while ago about adapting MBCT/MBSR training.  He was understandably concerned.  If we have a treatment package that has been shown to work, then we should be thoughtful before rushing in to adapt it.  Maybe one would be "throwing the baby out with the bathwater".  If I was running groups to treat current depression and help reduce depressive relapse for carefully selected participants, all of whom had suffered three or more previous episodes of depression, I would totally agree with Mark.  I think it would be unjustified to fiddle with the content of what has been shown to be an effective intervention unless it was as a part of a well thought through treatment trial.  However I run courses for a much more diverse mix of participants (and I suspect this is true for most teachers of MBCT/MBSR).  With these mixed populations, as the MacCoon et al trial highlights, it's much more arguable how key mindfulness is as a change mechanism.  As I wrote over two years ago "I've decided to bite the bullet and develop a group "life skills" training course for the patient population I see, from the ground up - using inspiration from a wide range of successful interventions - rather than simply take an already developed training course 'off the shelf'".  I've described the "Life skills for stress, health & wellbeing" course that I put together in some detail.  As research on mindfulness and other practices that support health & wellbeing is published, I intend to incorporate helpful new findings into the evolving material of the "Life skills" course (and it has already developed somewhat since the description I wrote two years ago).  I'm very excited about the emerging literature on applications of mindfulness.  It's marvellous.  However my primary loyalty is to my course participants.  I would argue passionately that current data supports a broader-based group intervention as being likely to be most helpful for this kind of diverse patient population.  Of course I might be wrong.  Hence the central importance I would place on monitoring and feedback during the course itself, and this is the subject of the next blog in this "Personal directions" series.