Conflict: not too much, not too little - some research suggestions

(this post is downloadable as both a Word doc and as a PDF file).

Occasional disagreement and conflict are pretty much inevitable.  I scanned Medline for relevant research articles to see if there are any helpful insights that have emerged recently.  As usual when one trawls for information, hundreds of publications emerge.  Here are a few of the areas I found particularly interesting.

Productive conflict can correct unfairness & injustice.  Conflicting opinions may also help individuals gain a fuller picture of a situation.  And conflict can provide opportunities for reviewing & working to improve patterns of interpersonal behaviour.  So in the paper "Standing up for a change: reducing bias through interpersonal confrontation", Czopp & colleagues showed that although being confronted about racially prejudiced behaviours led to distress & interpersonal tension, those who were challenged were subsequently less likely to behave in such prejudiced ways again.  In another interesting study "Group decision making in hidden profile situations: dissent as a facilitator for decision quality", Schulz-Hardt et al demonstrated that, where discussion participants each knew about somewhat different parts of a fuller picture, initial dissent led eventually to better overall group decisions.  They wrote "The beneficial effect of dissent on group decision quality was mediated primarily by greater discussion intensity and to some extent also by less discussion bias in dissent groups".  Other research teams have reported somewhat similar findings.

And what about our personal patterns around confrontation & conflict?  It does seem usually that a middle road is best here - we neither want to be a doormat nor a sledgehammer: 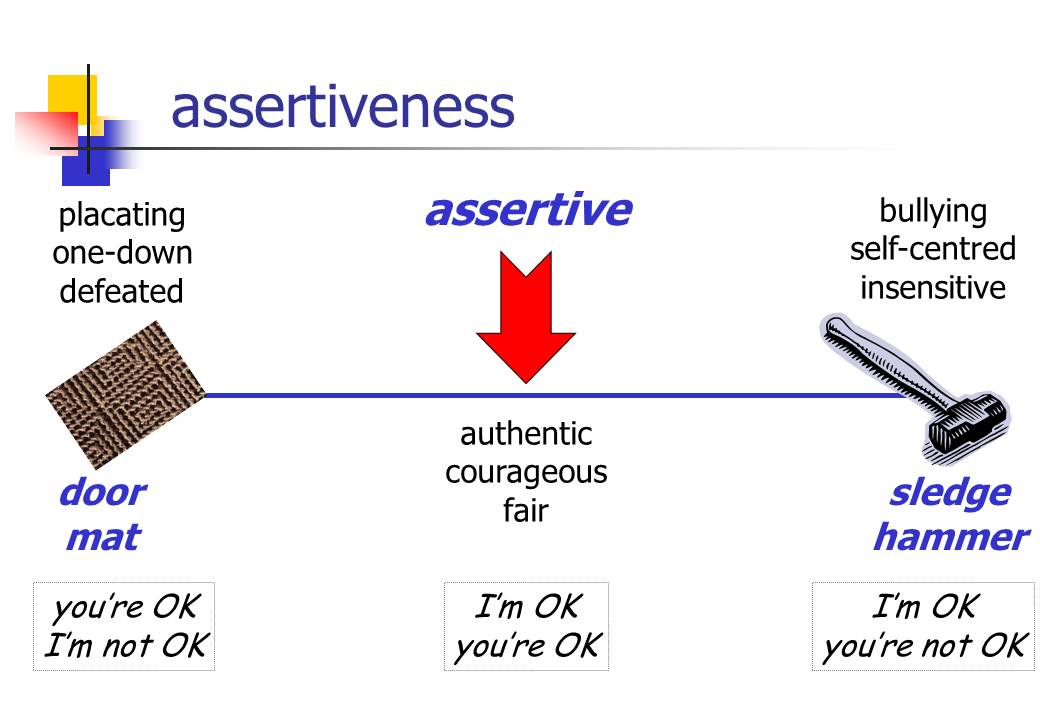 (This diagram is downloadable as both a Powerpoint slide and as a PDF file).

Being a "doormat", non-assertive, grin-and-bear-it kind of person can be very self-damaging.  Eaker et al, in their paper "Marital Status, marital strain, and risk of coronary heart disease or total mortality: the Framingham offspring study", reported on follow-up of over 3,500 participants for 10 years to assess "specific aspects of marital strain and incident CHD".  Amongst other findings, they found "Women who "self-silenced" during conflict with their spouse, compared with women who did not, had four times the risk of dying".  And in a somewhat parallel finding involving men, the authors of "Covert coping with unfair treatment at work and risk of incident myocardial infarction and cardiac death among men: Prospective cohort study" wrote "Covert coping with unfair treatment at work - occurring when an employee does not show the 'aggressor' that he/she feels unfairly treated - has been found to be associated with cardiovascular risk factors. We examine whether covert coping also predicts incident coronary heart disease."  Following 2,755 men for an average of nearly 10 years, they found "Men who frequently used covert coping had a 2.29 times higher risk (of heart attack or death from heart disease) than those who did not use this coping".

Doormats don't do well, but then neither do sledgehammers.  Jennifer Crocker & her team have published widely on this - see, for example, their paper "Creating hostility and conflict: Effects of entitlement and self-image goals" where they reported "People who feel entitled to admiration and respect from others do not make good companions. This research shows one reason why. Entitled people adopt self-image goals (goals that aim to construct and defend a positive self-image), which then lead to interpersonal conflict and hostility".  And this doesn't work well for the sledgehammer.  In their paper "Creating and undermining social support in communal relationships: the role of compassionate and self-image goals" , Crocker & Canevello found over a ten week study of college students that "Average compassionate goals predicted closeness, clear and connected feelings, and increased social support and trust over the semester; self-image goals attenuated these effects. Average self-image goals predicted conflict, loneliness, and afraid and confused feelings; compassionate goals attenuated these effects".  And from a different research group there is the catchily titled ""Isn't it fun to get the respect that we're going to deserve?" Narcissism, social rejection, and aggression."  where they found "Across four studies, narcissists were more angry and aggressive after experiencing a social rejection than were nonnarcissists".  And, at least in some countries, this tendency to "entitlement" seems to be becoming worse - "Egos inflating over time: a cross-temporal meta-analysis of the Narcissistic Personality Inventory" - although possibly we understand the problem a bit more clearly - "Narcissists Come Into Focus as Data Clarify Disorder".