Personal ‘retreat’: third reflection – quietening down ... and do we need time to change?

I've already written a couple of blog posts during my "retreat" at this Study Centre - "Setting the scene" and "Settling & questioning".  Now it's the start of the third day … yesterday was a strange mix of tastes.  Out on a couple of walks … for over three hours in this Hampshire countryside.  Beautiful trees, wet & muddy underfoot, few people, cloud-filled skies, gentle.  Sitting quietly too, yoga practice, writing & reading … exploring Krishnamurti & his teachings again.  Spending a bit of time as well thinking back over this last year.  In February 2015, Catero & I were away in Kerala … a trip that was a much more active time than this current ‘empty’ ten days in England, but both of these trips, these ‘adventures’ … a year apart … provide space away and perspective looking back at my life in Scotland. 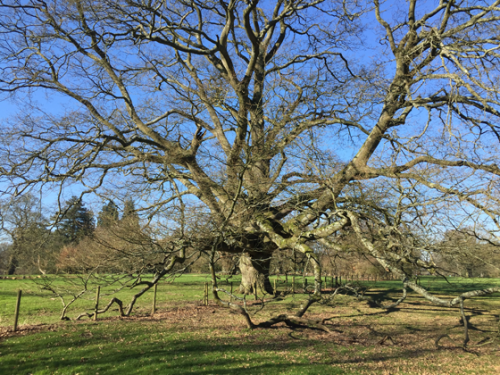 A year ago, in India, looking back … again I was so grateful, feeling blessed in so very many ways.  One area that I decided to work on, however, centred around occasional ‘bumps’ I have had over the years with some friends.  Feedback suggests that, although what I say is often much appreciated, at times it can come over as too ‘dominant’ … maybe at times not respectful enough of input from others.  I think there’s a valid theme in here about some people sometimes not feeling adequately valued by me.  This is complex and obviously is likely to say something about the other people involved as well as about me.  However I wanted to look at this.  I deeply want to live in this world in helpful ways, so I’m interested in obstructions, in ways that I might sometimes come across unhelpfully or upsettingly.

My primary training is as a medical doctor but my work is mainly now as a psychotherapist … although general health & also well-being deeply fascinate me too.  I decided to work on this area of occasionally upsetting people by ‘coming forward too much’ or ‘not being respectful enough’, and maybe ‘judging’ unkindly at times.  I called the theme ‘jamming in the jazz band’ and set myself the challenge of listening better, of coming into the music, the interplay between myself and others, in some ways as if I was ‘jamming with other musicians’.  I didn’t want to step in to solo loudly & insensitively to the music others were making, but I didn’t want to slump back against a wall with my ‘saxophone’ (or maybe take my hands off the piano keys) and withdraw from the interplay either.

I worked at this in a whole series of ways and I’ve written about it in this blog.  One research paper that I was intrigued by and used was Hudson & Fraley’s 2015 study "Volitional personality trait change: Can people choose to change their personality traits?" with its abstract reading “Previous research has found that most people want to change their personality traits.  But can people actually change their personalities just because they want to? To answer this question, we conducted 2, 16-week intensive longitudinal randomized experiments.  Across both studies, people who expressed goals to increase with respect to any Big Five personality trait at Time 1 tended to experience actual increases in their self-reports of that trait — as well as trait-relevant daily behavior — over the subsequent 16 weeks.  Furthermore, we tested 2 randomized interventions designed to help participants attain desired trait changes.  Although 1 of the interventions was inefficacious, a second intervention that trained participants to generate implementation intentions catalyzed their ability to attain trait changes.  We also tested several theoretical processes through which volitional changes might occur.  These studies suggest that people may be able to change their self-reported personality traits through volitional means, and represent a first step toward understanding the processes that enable people to do so.”

I see personality traits as involving long-term patterns of behaviour with others and with ourselves.  My ‘jamming in the jazz band’ intention certainly potentially involved working on long-term patterns like this, so I was fascinated to try out Hudson & Fraley’s ideas.  I did work with them (and other methods too) and I think, from my own experience and from feedback from people who I’ve been with, that I was quite successful.  Now the point I want to make is to contrast this deliberate, hard-working, step-by-step approach to change with the ‘lightning flash’, awareness-based, instantaneous possibility advocated by Krishnamurti.  I think he would argue that the ‘self’ trying to change in the step-by-step, effortful way is in danger of strengthening a sense of being an individual separate from others & and of simply rearranging patterns of thought & behaviour without a potentially more profound inner shift.  This seems as though it might link with the words of the Eagles song “Desperado” which went round & round in my head on my first evening here … “Your prison is walking through this world all alone.”

I believe in scientific method … in a rigorous, careful checking whether our hypotheses are actually borne out by the facts or not.  I understand that good science is hard to do, and many so-called ‘facts’ rest on poorly done research.  However, despite these cautionary comments, one can still put forward strong arguments supporting the general understanding that psychological change work typically takes time to develop – see, for example, the blog post “If you see a therapist, how many (psychotherapy) treatment sessions are you likely to need?” with it’s comment “ … quite a few clients (possibly about 30%), may only need three or so sessions to achieve very worthwhile benefits.  About 50% are likely to have achieved worthwhile benefit after eight sessions and approximately 75% after fourteen.  There is a problem here though.  Aiming for formal "full recovery" makes better sense if possible.  Here we may well need twenty sessions of therapy to help about 50% of clients to full recovery.  To help 75% reach this very desirable goal may well take at least fifty sessions, so for example Arntz & colleagues' recent successful treatment of clients suffering with diverse personality disorders - "Results of a multicenter randomized controlled trial of the clinical effectiveness of schema therapy for personality disorders" - involved forty sessions in the first year of treatment and ten in the second.”

So despite what Krishnamurti might be suggesting, it seems pretty clear that worthwhile change with psychotherapy usually takes time.  However, fascinatingly there is also strong evidence highlighting that change may well occur abruptly – see Aderka et al’s 2012 review: "Sudden gains during psychological treatments of anxiety and depression: a meta-analysis" and a series of further research papers since.  I would like to look more at this fascinating tension between the finding that psychological change typically takes time and the well-documented observation that often effective change may occur very rapidly.

For tomorrow's post, see "Fourth reflection - our sense of self".