Truly excellent therapists have "grace under interpersonal pressure" - How can we assess ourselves?

I wrote a post recently called "Truly excellent therapists have 'grace under interpersonal pressure - Fascinating new research".  I mentioned the classic 2009 Timothy Anderson paper "Therapist effects: facilitative interpersonal skills as a predictor of therapist success".  I then went on to describe three great new additions to this literature - Anderson's recent publications "Therapist facilitative interpersonal skills and training status: A randomized clinical trial on alliance and outcome" and "A prospective study of therapist facilitative interpersonal skills as a predictor of treatment outcome" and Schottke et al's "Predicting psychotherapy outcome based on therapist interpersonal skills: A five-year longitudinal study of a therapist assessment protocol".  So what are some of the potential implications of this work for improving assessment, training and supervision of psychotherapists? Well it's probably worth pointing out that as mental health professionals we seem to be very poor at assessing our own effectiveness.  As I illustrated in the last post's Saxon & Barkham slide, a series of research studies suggest that about a sixth (approximately 15-20%) of psychotherapists achieve excellent results, about two thirds achieve good results, and about a sixth (approximately 15-20%) achieve poor results.  What happens if you ask mental health professionals to rate themselves?  Well you don't get this sixth - two thirds - sixth breakdown of assessments.  In fact in Walfish et al's research - "An investigation of self-assessment bias in mental health providers" - 25% of mental health professionals rated themselves in the top 10% for effectiveness, and not a single one rated themselves as below average (see slide below).  A much more extensive investigation of physicians - "Accuracy of physician self-assessment compared with observed measures of competence: a systematic review" - showed a similar pattern with "the worst accuracy in self-assessment among physicians who were the least skilled and those who were the most confident."  Clearly we would probably be self-deluding if we relied on rating ourselves. 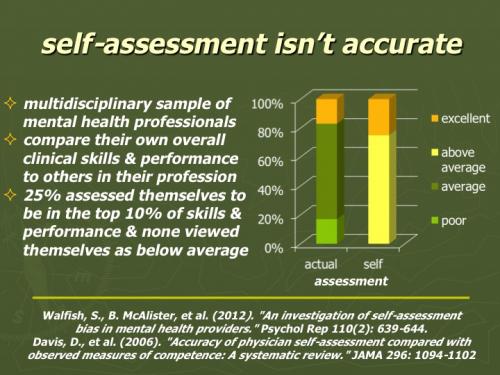 (downloadable as a Powerpoint slide and as a PDF file)

The gold standard for assessment of therapist effectiveness is to compare our actual outcome results, averaged over a large number of clients, with results obtained by excellent, good & poor therapists working with similar client populations.  In the UK, emerging IAPT data is beginning to provide this opportunity.  Although still much too thin on the ground, the availability of comparative outcome information is starting to emerge internationally as well. The overall picture painted with this potential overview of our personal practice is gold dust, but it doesn't particularly help a therapist working with a specific client.  Here routine outcome monitoring and sessional comparison of improvement trajectory with a predicted recovery pattern obtained from many clients with similar presentations can - especially using computer systems - provide immediate feedback and alert one to the danger that one is slipping off track.  The benefits of this kind of approach are considerable and well documented - see, for example Castonguay et al's chapter on "Practice-orientated research" in the very helpful "Handbook of psychotherapy and behavior change (6th ed)" and also several posts on this website including "What shall we do about the fact that there are supershrinks & pseudoshrinks?" and the somewhat shrill "Psychotherapists & counsellors who don't monitor their outcomes are at risk of being both incompetent & potentially dangerous".

What about other forms of assessment - possibly even obtainable before therapists have accumulated large amounts of relevant personal outcome data?  Of course, if we knew what factors led some therapists to be more effective than others, then we could test for them.  Traditional achievements like academic background, therapeutic approach & professional qualifications tell us little about a therapist's effectiveness in helping clients. An alternative look at what distinguishes more helpful therapists is provided by researchers like Bruce Wampold. In his freely viewable American Psychological Association online paper "Qualities and actions of effective therapists", he comments "Research suggests that certain psychotherapist characteristics are key to successful treatment.  The qualities and actions of effective therapist, based on theory, policy and research evidence, can guide therapists toward continual improvement" and he lists fourteen overlapping areas that he thinks are of particular importance.  I find Wampold's overview helpful, but a little hard to get traction on when asking myself what specifically should I be doing to improve my effectiveness?  In some ways, research highlighting particular areas like mindfulness & resilience seems to have more obvious direct training implications - see last year's post "What personal qualities distinguish more & less effective therapists?" for more on this.  And this is where the recent papers, mentioned in the first paragraph of this post, are so useful.  They highlight that interpersonal skills, demonstrated when dealing with confronting situations, are a key area that distinguishes more and less effective therapists.

But how does one teach "grace under interpersonal pressure"?  Well, I have a friend who used to train airline pilots.  They certainly didn't assess them by observing their work under low challenge standard flight conditions. What they did was put the pilots into a simulator and then video them as they reacted to simulated emergencies. Seeing what they did (and training them) when the cockpit filled with smoke or the undercarriage failed to go down was the sort of intervention they focused on.  It's not rocket science.  We should be exploring this kind of model when training therapists.  Other branches of the health professions are already making extensive use of actors to simulate different therapeutic challenges.  It's high time that we do much more of this in psychotherapy training.  Maybe we could even get a first pass sense of potential therapist excellence simply by asking them about how they feel they would cope with challenging client interactions.

This is what Vine & colleagues did with airline pilots in their recent paper "Individual reactions to stress predict performance during a critical aviation incident" with its abstract reading "Background: Understanding the influence of stress on human performance is of theoretical and practical importance. An individual's reaction to stress predicts their subsequent performance; with a 'challenge' response to stress leading to better performance than a 'threat' response. However, this contention has not been tested in truly stressful environments with highly skilled individuals. Furthermore, the effect of challenge and threat responses on attentional control during visuomotor tasks is poorly understood. Design: Thus, this study aimed to examine individual reactions to stress and their influence on attentional control, among a cohort of commercial pilots performing a stressful flight assessment. Methods: Sixteen pilots performed an 'engine failure on take-off' scenario, in a high-fidelity flight simulator. Reactions to stress were indexed via self-report; performance was assessed subjectively (flight instructor assessment) and objectively (simulator metrics); gaze behavior data were captured using a mobile eye tracker, and measures of attentional control were subsequently calculated (search rate, stimulus driven attention, and entropy). Results: Hierarchical regression analyses revealed that a threat response was associated with poorer performance and disrupted attentional control. Conclusion: The findings add to previous research showing that individual reactions to stress influence performance and shed light on the processes through which stress influences performance.

Helpfully, the excellent BPS Digest report on this research commented "A new study reports that, more than relevant facts such as age and years of experience, pilots' answers to two simple questions can more accurately forecast how they will respond to a stressful situation. Samuel Vine and his colleagues recruited 16 experienced commercial airline pilots (average age 35; two women) to complete a Bombardier Dash 8 flight simulator exercise. After they readied the plane for take-off, the pilots were told that the exercise would involve an engine failure occurring shortly after take off (widely considered one of the most stressful situations a pilot can face) and their task would be to land the plane safely. It was at this point that the two key questions were posed to the pilots: "How demanding do you expect the task to be?" & "How able are you to cope with the demands of the task?" The pilots scored their answer to each question on a scale of 1 (not at all) to 6 (extremely). The difference between the two provided a single measure of whether the pilots interpreted the forthcoming emergency as a challenge (when coping ability outweighs demands) or a threat (coping ability insufficient for the demands). The important finding was that this single measure accurately predicted how well the pilots subsequently coped with the engine failure during the flight simulation. Pilots who rated the upcoming situation as more of a threat tended to perform worse than those who rated it more as a challenge."  This is an interesting thought.  Maybe we should be screening psychotherapists with similar questions - for example on the same 1 to 6 scale, "How demanding do you find treating really interpersonally difficult clients?" and "How able are you to cope with the demands of this task?"

Even noting how therapists predict the level of difficulty & their ability to respond to these interpersonal tasks yields helpful information.