Yesterday evening was the sixth session of the "Opening up" group.  It had been a longer gap than usual - ten days since our full day meeting at the fifth session.  As we often do, we began with a round of "checking in"; an opportunity for all of us to say briefly how we were feeling.  Like two or three others, I had been particulary busy in the preceding few days.  Great how present-time, honest interaction with a group of others brings me out of all that brain-busyness into being more here-and-now.

There was some untangling to do from last session.  I was concerned that I had upset someone with feedback I'd given them at the end of last time.  My experience in this kind of interpersonal group is that sometimes this kind of "upset" can be very helpful, but probably only if it's understood and digested.  Also, although I'm the facilitator of this group and have most experience in this kind of work, I'm also a group member.  My take on things may sometimes have value, but it's certainly not some kind of direct line to reality - other group members' impressions are so very important too.  Partly because the person I felt I'd upset had earlier said they were interested in getting more feedback from others in the group, this seemed a good time to encourage a "hot seat" exercise where they had the opportunity to get this.  It was also potentially a helpful way of putting anything that I had felt & said into a broader context.  They courageously agreed to go ahead with this and, in fact, expressed concern that people might be too "nice" in their feedback.  I suggested people tried phrasing their feedback as both something that they had particularly appreciated or celebrated about the person in the hot seat, and also something that they'd found a bit of difficulty with or wanted the person to think about or be aware of.  This "mixture of colours" way of giving feedback can sometimes make what's shared more valuable (although I think there's a danger that the person receiving the feedback may remember the "difficulties" and forget the "appreciations").  Maybe this "hot seat" exercise is something we could all try at the last session of our group in a couple of weeks' time?

As an aside to any group facilitators or potential group facilitators reading this post, I personally would consider it incompetent to encourage another group member to do this "hot seat" exercise without knowing what it might feel like through having experienced it myself.  I've probably been in the "hot seat" in this kind of way at least fifteen to twenty times over the years.  It ain't easy - rich, interesting, intense, but not easy.  And if at the last session we do go ahead to have everyone get a chance to be in the hot seat, I will certainly take my turn receiving others' feedback.  In this kind of interpersonal group, I deeply believe it's not OK to stand on the side of the swimming bath shouting suggestions to real swimmers.  As group facilitator I too need to be a "real swimmer".  See the recent post "A quiet rant to group facilitators & would-be group facilitators" for more on this.

And if we do focus on this hot seat exercise at the last session, I will encourage there to be someone scribbling a record of what's said to each person and will encourage people giving feedback to do it while holding a microphone.  This way everyone receives both a tape containing feedback from everyone else in the group and a written sheet noting the points that have been made.  I don't force this hot seat exercise onto groups but, if they're ready to go with it, it can be very precious.

As I mentioned when describing the first group session, this is "Johari Window" territory (see below).  We're increasing the open area of the window.  When else do we get genuine, caring, face-to-face feedback from a range of other people who have similar experience of being with us and observing how we are interpersonally over many hours of interactions?  This group has now been together for six sessions (five evenings and a day) - 16 hours of uninterrupted, undistracted time relating with each other.  This is an immensely rare opportunity.  As Burns wrote "O wad some power the giftie gie us to see oursels as ithers see us!  It wad frae monie a blunder free us, an' foolish notion." 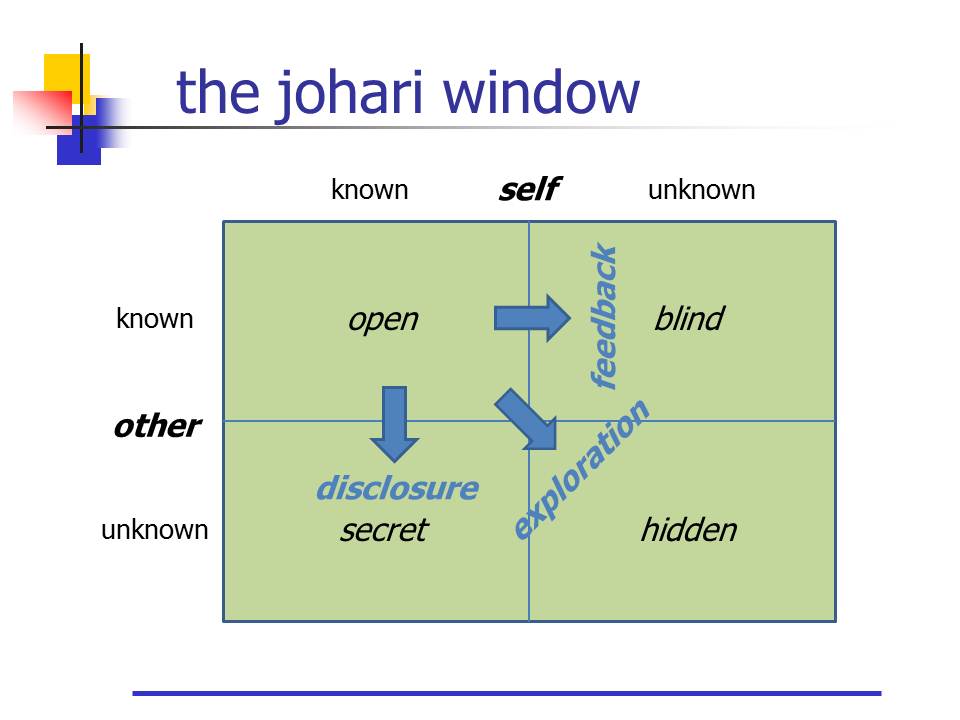 If you want a copy of this diagram, here are downloadable PDF and Powerpoint versions.

And the focus of the group moved on.  In earlier sessions people shared "back stories" and that can be very valuable.  In the last couple of meetings, we've moved to more present time interactions "in the room".  I've mentioned the importance of working at moderately high levels of emotional engagement.  If it's too emotionally intense people may not be able to take it in, if there's too little intensity there may not be much of importance to take in anyway.  However people in the group vary over what's "too much" or "too little" intensity for them.  Part of the group facilitator's challenge is, in group selection, to try to select people who have approximately equal ability at swimming in emotional waters.  However this ability isn't just about experience of groups.  It's about life experience more generally, about attachment security, about emotional/social intelligence, about commitment and courage, all kinds of things.  As "swimming instructor" part of my job is to notice if someone is either "swallowing too much water" at one end of the spectrum or isn't particularly stretching themselves as they "swim in the group pool" at the other end of the spectrum.

There is much that can be involved in these "in the room" interactions.  A metaphor I described in the handout "What it's usually helpful to talk about in the group" suggests "We're like musicians - a ‘chamber orchestra' or ‘jazz group' - who have gathered to play music together.  The instrument each of us plays is ourself - allowing who we are and how we feel & think to sound out awarely and truthfully.  Sometimes we'll be very much in tune with others and feel that we're seen clearly, valued & strengthened in who and how we are.  Sometimes we're out of tune with others.  This can be particularly valuable.  By looking at these ‘out of tune' times - times when we feel irritated, misunderstood, suspicious, or upset - we can often learn a lot about how we're perceived and what we might benefit by being more aware of.  The handout "Honesty, transparency & confrontation" gives more details of how we can work constructively with ‘out of tune' times".

And this is what we continued to do.  One person in particular was able to feel and have the courage & skill to articulate a difficulty they were having with how another person often expressed themself in the group.  This is important territory that many people never visit much in interpersonal relationships - or if they do, it's so often with attack/defence, blame/denial, distancing/resentment.  It's what many people mean when they talk about confrontation, but it might be better seen as "self-disclosure" - not so much attacking as vulnerably & caringly opening up.  It can be so hugely useful to explore how to do this as well as one can.  And this led as well to looking a little at how one knows what one feels - at how one can talk a bit less from the head and a bit more from the heart and gut.  The handout on "Emotional awareness" addresses this issue, as too do Daniel Goleman's books on emotional & social intelligence, "Expressing emotion" by Kennedy-Moore & Watson, and many of Leslie Greenberg's books including "Emotion-focused therapy: coaching clients to work through their feelings".  These are important aspects of emotional & interpersonal competence!

For a description of our next meeting, see "Opening up group, seventh session".