This is the sixth - and a rather longer - Moroccan post.  It looks a little at mindfulness and interpersonal conflict. 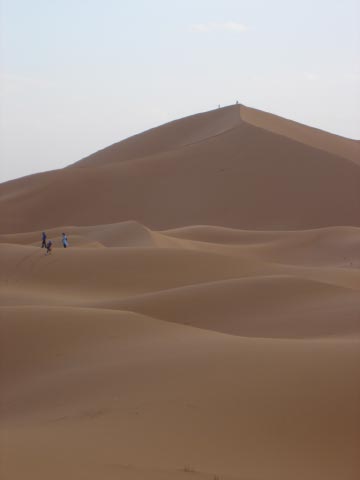 And after the siesta yesterday, we walked (again without the camels) up to the top of the highest "singing dune" (so-called because of the noise it sometimes makes in the wind).  We sat with the sun setting and then ran wildly down the steep, maybe 300 foot or so, slope of the dune.  Then back through the diminishing light to the camp.

There are two big tents - one for our five Berber guides - and the other for some of us.  We also have a couple of smaller two-man tents we can put up, if we want to ... and there's the special option too of sleeping out under the amazing stars!

Although the group is very caring and open, of course we are likely sometimes to get on each others' nerves a bit.  What to do when this happens?  It's a microcosm, in a way, of our larger lives and relationships back home.  The first full day in the desert, I was a bit at sixes and sevens inside - adjusting to the change of pace, the change from full-on busy life to something much simpler, less demanding, less structured.  I found myself a bit internally scratchy and critical with some others in the group and even more so with myself.  Just settling more during the second day, settling and being kinder, allowed most of this scratchy criticism to simply evaporate.  Klapwijk and Lange recently reported on this kind of phenomenon in a paper looking at the power of generosity (see 7th study down the page if you follow this link!) to promote cooperation and trust in situations where people, every now and again, behave in somewhat difficult ways.

I remember a comment made by Rajneesh.  He was one of a dozen or so influences on how I saw things - interpersonally and spiritually - back in the 1970's.  He talked about "Four steps to love".  They were just the comments of one man, but they pulled things together for me well.  The four steps, as I remember them, were: 1.)  "Be present" - a good classic comment about becoming aware and connected.  It certainly seems an excellent first step to drop through conditioning & mind noise & oughts & shoulds & fears ... 2.)  "Transmute the poisons" - I understood this to mean, work in any of several different ways to transform anger, dislike, criticism, self-consciousness and other states that get in the way of allowing love.  3.)  "Share the positive" - the wheel of feelings goes round.  Sometimes, especially if we're awake to how our heart is, we spontaneously want to smile, to reach out, to care.  The suggestion is to be sensitive to these naturally arising feelings, impulses, energies, and allow them to express.  4.)  "Be nothing" - I find this injunction trickier.  I mostly see it as a comment on how when we're present and genuinely, spontaneously expressing love, affection, kindness, happiness, then we're not stuck in our heads as separate beings. We're much more at one with the action, with the relationship, in flow.  So I tend to find this fourth Be nothing injunction as redundant if one is following the initial three well.

But how to Transmute the poisons if they don't simply settle with the first injunction to be present and mindful?  Interesting that with the first two major research studies on mindfulness-based cognitive therapy (MBCT) and depressive relapse, those randomised to the MBCT training did considerably better than those simply having treatment as usual (TAU) - if they had already suffered at least three previous episodes of depression.  If they had only had one or two previous episodes of depression, in both studies these people did worse if they were in the MBCT group than if they were in the treatment as usual (TAU) group.  This may have been a chance finding - the numbers of people in the research studies who had had only one or two previous depressive episodes were quite small.  It may however have been a genuine finding.  We know that if someone suffers a series of depressive episodes, the importance of external triggering circumstances tends to be greater for earlier episodes and becomes less important for later episodes.  It's quite possible that mindfulness practices are more relevant for reducing depressive relapse (or active depression itself) in this latter group of people where it's internal processes that seem more important than external triggers in the development (and maintenance) of low mood.  For others, with only one or two previous episodes of depression, external factors may be more relevant and problem solving and interpersonal approaches, for example, may be more helpful.  It's my impression - and of other more experienced meditation teachers than me (see Jack Kornfield article page 1 & page 2) - that people can sometimes use meditation and spiritual practices as way to try to avoid psychological/emotional/interpersonal issues that might be better dealt with in more direct, "non-meditative" ways.

So there are fairly inevitable occasional frictions that develop when a group of people - even a group of friends - spend a lot of time together over several days.  With this dear group of friends there's a shared culture of kindness and also of honesty.  So this morning, I felt that someone's humour with me was repeatedly a bit sharp.  I took some time to check out if I was doing anything to upset them.  Very good.  Anxiety provoking to raise interpersonal difficulties, but then we speak it through and it leads to so much greater understanding and closeness.

This issue of when to use interpersonal problem solving as a way of transmuting the poisons can be quite subtle.  As a general rule, if I don't know someone particularly well, I would lean towards trying to understand and appreciate their position better before opening any kind of "confrontation".  Higher scores on questionnaires like the IIP-48 - with subscale spikes on the scoring sheet - suggest potential problem areas with one's ability to problem solving interpersonally (and maybe increased likelihood of using meditative practices as a form of avoidance).  Learning approaches like Non-Violent Communication may be helpful here.

Then all of us checking in briefly with each other - how we're doing - at breakfast before we start walking again.  Out through the dunes.  Occasional tamarisks again.  The dried bed of the Draa river, and eventually to a great camping spot.