I wrote yesterday of my three wishes for this ten day “retreat” in Hampshire … a “being/doing” shift, an exploration of awareness (& it seems also our sense of self), and a chance to get perspective on my life.  For the first week I focused especially on the first two of these hopes.  In this final three days of my stay, I’ve swung much more to looking at my life overall.  When I’m “sitting on the bank of the river” after spending such a quiet beautiful week here, it’s a lot easier to get perspective than when I’m caught up in the fast flow of my day to day life.

I’ve used a number of ‘analytical’ tools to help me look at this … and been open to insights that have “popped through the letterbox” of my mind from pre-conscious sources like dreams & songs.  I’m a great fan of mindfulness, but I’m also appreciative of how the wandering associative mind may sometimes be more creative.  Last year Zedelius & Schooler published their paper "Mind wandering "ahas" versus mindful reasoning: alternative routes to creative solutions" with its abstract commenting “Based on mixed results linking both mindfulness and its opposing construct mind wandering to enhanced creativity, we predicted that the relationship between mindfulness and creativity might depend on whether creative problems are approached through analytic strategy or through “insight” (i.e., sudden awareness of a solution). Study 1 investigated the relationship between trait mindfulness and compound remote associates problem solving as a function of participants’ self-reported approach to each problem. The results revealed a negative relationship between mindfulness and problem-solving overall. However, more detailed analysis revealed that mindfulness was associated with impaired problem solving when approaching problems with insight, but increased problem solving when using analysis. In Study 2, we manipulated participants’ problem-solving approach through instructions. We again found a negative relationship between mindfulness and creative performance in general, however, more mindful participants again performed better when instructed to approach problems analytically.”

And this is no isolated finding, for example Baird & colleagues’ "Inspired by distraction: Mind wandering facilitates creative incubation" commented “Although anecdotes that creative thoughts often arise when one is engaged in an unrelated train of thought date back thousands of years, empirical research has not yet investigated this potentially critical source of inspiration. We used an incubation paradigm to assess whether performance on validated creativity problems (the Unusual Uses Task, or UUT) can be facilitated by engaging in either a demanding task or an undemanding task that maximizes mind wandering. Compared with engaging in a demanding task, rest, or no break, engaging in an undemanding task during an incubation period led to substantial improvements in performance on previously encountered problems. Critically, the context that improved performance after the incubation period was associated with higher levels of mind wandering but not with a greater number of explicitly directed thoughts about the UUT. These data suggest that engaging in simple external tasks that allow the mind to wander may facilitate creative problem solving.”  Fascinating … and even my gentle extra hour in bed after waking this morning had some rationale behind it (besides the urge to continue being cozy & warm on a cold February morning).  Associative thinking can be a curse when depressively ruminating or anxiously worrying, but when one is more buoyant, sometimes deliberately dipping into the associative stream can bring up a rich catch … see Wieth & Zacks’ "Time of day effects on problem solving: When the non-optimal is optimal" or even Verhaeghen et al’s beautifully named "Why we sing the blues: the relation between self-reflective rumination, mood, and creativity" … although Baas et al’s “A meta-analysis of 25 years of mood-creativity research: hedonic tone, activation, or regulatory focus?" suggests I might have been even more creative if I had been active e.g. walking this morning rather than just lying in bed.

I feel blessed and happy.  This trip has worked out so well for the intentions I came with … being/doing shift, exploration of awareness, and perspective on my life.  Breathing out and now breathing in.  I’ve been harvesting insights & intentions to my diary, the new growth from insights that have blossomed in my mind, as well as so much information from exercises like the “Personal community map” and the associated “Personal community questions”, the “Respected figures exercise”, the “Funeral speeches”, the “Goals for roles brainstorm”, and the “Goals for roles: 5 year, 1 year & 3 months”. 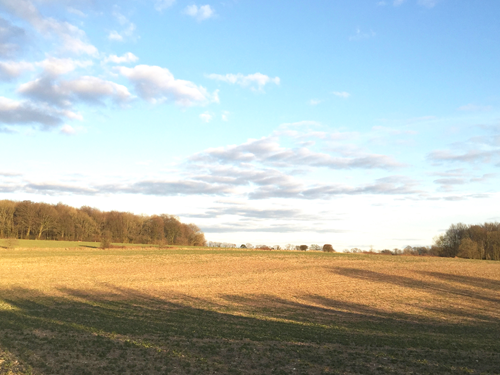 Yesterday afternoon here I went for a last walk through this delicious, intimate, stubble-field, bare tracery-treed landscape.  I imagined that I had access to all the information (both insight-derived and analytic) from reviewing my current life.  Then I pretended that it didn’t apply to me, but to an Australian doctor who I had only just come across.  The choice of Australia (right round the other side of the world) and of a doctor I didn’t know (rather than a friend or acquaintance) was deliberate.  Polman & Emich’s research described in their paper “Decisions for others are more creative than decisions for the self" commented “Four studies investigate whether decisions for others produce more creative solutions than do decisions for the self and if construal level explains this relation. In Study 1, participants carried out a structured imagination task by drawing an alien for a story that they would write, or alternatively for a story that someone else would write. As expected, drawing an alien for someone else produced a more creative alien. In Studies 2a and 2b, construal level (i.e., psychological distance) was independently manipulated. Participants generated more creative ideas on behalf of distant others than on behalf of either close others or themselves. Finally, in Study 3, a classic insight problem was investigated. Participants deciding for others were more likely to solve the problem; furthermore, this result was mediated by psychological distance. These findings demonstrate that people are more creative for others than for themselves and shed light on differences in self-other decision making.”

And I was able to be pretty damn clear & firm with my imaginary Australian colleague.  Three clear injunctions now emerged from this time away … as well as a host of other experiences, thoughts & perspectives.  One injunction is to cut back somewhat more on work with clients … not a huge amount, but I’m going to make clearer boundaries.  I love what I do and it feels hugely worthwhile to sometimes be able to help others.  However there’s a kind of “mission creep” that gradually takes over more & more of the time in my life.  So I’m putting a “bright line” around Mondays, Thursdays & Sundays and a “commitment contract” backs up the decision not to book any more one-to-one work with clients on these days (at least for a trial period until the end of this year).  The second injunction is to spend more time in relationships, especially with Catero my wife.  One of us is likely to die before the other and I don’t want either of us to live on regretting that we didn’t make enough time for each other.  We have a very precious relationship and I want to keep celebrating this.  I have made some specific “bright lines” about when I finish work in the evening, about how I intend to plan better, and about setting aside time for each other.  And I want to appreciate friends a bit more too.  I’m so fortunate here as well, but there are intentions about friendship from the “Personal community map” exercise that I want to honour.  And the third injunction is about exploring the self-sense and how it comes & goes.  I intend to find out more about our up to date scientific understanding of sense of self, to explore the way it coalesces & evaporates with how I pay attention and engage with others & the world, and to look at how all this could be relevant & helpful sometimes for clients who come to me suffering & struggling with their lives.

The old saying “If you want to make God laugh, tell him about your plans” is very understandable … the future is full of uncertainty.  However there is also plenty of good research-based evidence highlighting that having deep, autonomous goals is associated with (and partly predictive of) higher levels of wellbeing.  Yin and yang … receptiveness and activity … they combine in the Tao, the way.

Spring is coming, the Grove here is full of miniature daffodils.  Blessings … 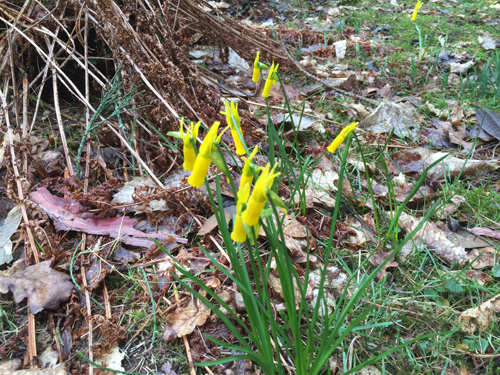