I'm running a workshop today on "Biological treatments for psychological disorders: an overview & update for therapists".  You can download the 100 plus slides by clicking here.  The overall outline of the day is illustrated in this slide: 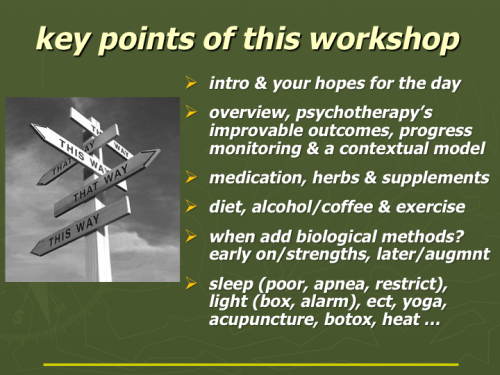 After introducing both myself and the seminar's aims, I did an exercise which encouraged the participants to voice their particular areas of interest in this broad field.  The next section - "Overview, psychotherapy's improvable outcomes, progress monitoring & a contextual model" - I have mostly covered in earlier blog posts. Examples include "Psychotherapy is helpful but has developed shockingly poorly over the last thirty years", "Some counsellors & psychotherapists are more effective than others" and "Lessons (for therapists) from emerging research on how people develop excellence".  We then moved on to the next section of the day - "Medication, herbs & supplements". 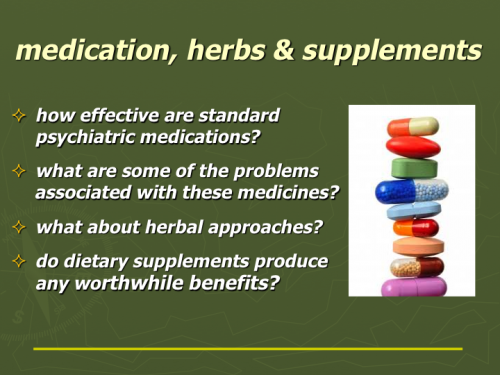 With an initial focus on psychiatric medications: 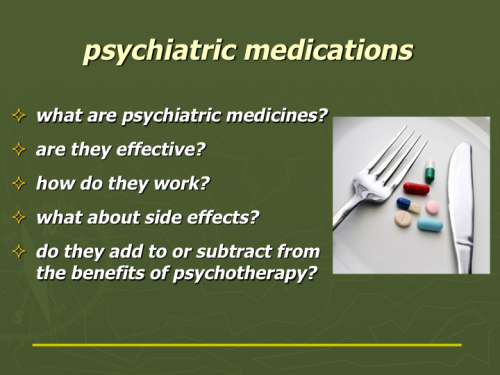 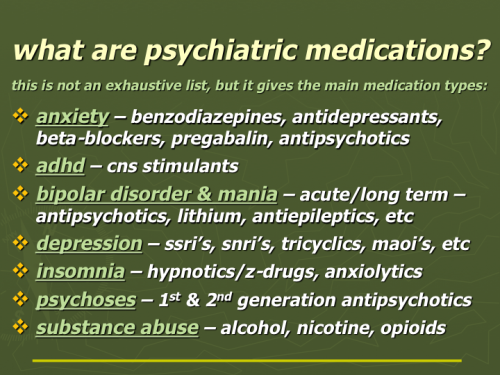 When discussing their effectiveness, I quoted Leucht et al's interesting 2012 paper "Putting the efficacy of psychiatric and general medicine medication into perspective: review of meta-analyses" and the conclusions reached by Huhn et al in their 2014 review "Efficacy of pharmacotherapy and psychotherapy for adult psychiatric disorders: a systematic overview of meta-analyses".  For more details on these points, see the downloadable slides of the full talk.  The "What about side-effects?" slide below opened up a discussion on this area, and I mentioned too the useful information leaflets produced by the Royal College of Psychiatrists here in the UK. 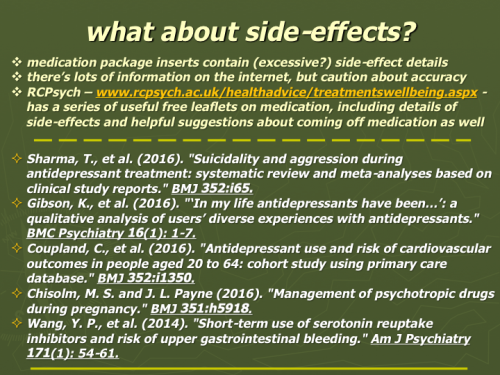 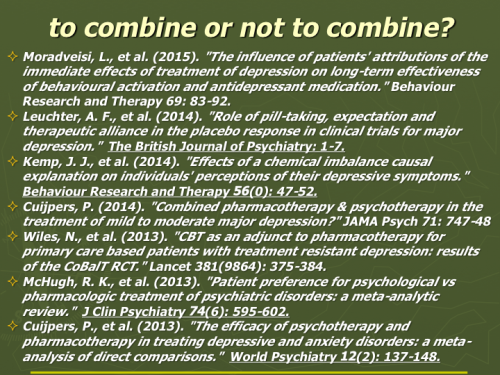 We looked too at the important question (see slide above), does combining medication and psychotherapy boost or detract from client outcomes?  As so often, Oscar Wilde's comment - "The truth is rarely pure and never simple" - seems relevant here.  The major focus of this part of the seminar was on antidepressants.  I did however mention that combined psychotherapy & pharmacotherapy seems to carry advantages with other disorders as well - see, for example, Salcedo et al's paper "Empirically supported psychosocial interventions for bipolar disorder: Current state of the research", Oud et al's "Psychological interventions for adults with bipolar disorder: systematic review and meta-analysis" and Turner et al's "Psychological interventions for psychosis: a meta-analysis of comparative outcome studies".  However, with the focus primarily on antidepressants, one of the most important papers attempting to answer the to-combine-or-not question is the 2014 "Adding psychotherapy to antidepressant medication in depression and anxiety disorders: a meta-analysis" with its clear finding that "The effects of combined treatment compared with placebo only were about twice as large as those of pharmacotherapy compared with placebo only, underscoring the clinical advantage of combined treatment. The results also suggest that the effects of pharmacotherapy and those of psychotherapy are largely independent from each other, with both contributing about equally to the effects of combined treatment. We conclude that combined treatment appears to be more effective than treatment with antidepressant medication alone in major depression, panic disorder, and OCD."

It seems quite probable too that these benefits of combined treatment extend beyond the more severe depressive presentations where additive treatments are typically used ... see Cuijpers's "Combined pharmacotherapy and psychotherapy in the treatment of mild to moderate major depression?".   We know that psychotherapy & pharmacotherapy produce very similar results with depression, when compared head-to-head (although not necessarily for the same people) ... see "The efficacy of psychotherapy and pharmacotherapy in treating depressive and anxiety disorders: a meta-analysis of direct comparisons".  So it appears from a quick assessment of the research literature that, at least for depression, one can use either psychotherapy or pharmacotherapy as comparable first line treatments, but that combining the two approaches is typically a good deal more effective (quite possibly even with less severe presentations).  The patchwork of mostly small research studies that have looked at the effects of clients either receiving or not receiving their first line treatment choice shows surprisingly weak differences in outcome - although effects on therapeutic alliance and drop-out also need to be considered.  Interestingly, McHugh's et al's review shows clear client preferences for psychotherapy - see "Patient preference for psychological vs pharmacologic treatment of psychiatric disorders: a meta-analytic review" - with the authors concluding "Aggregation of patient preferences across diverse settings yielded a significant 3-fold preference for psychological treatment."

Moradveisi & colleagues' 2015 paper "The influence of patients' attributions of the immediate effects of treatment of depression on long-term effectiveness of behavioural activation and antidepressant medication" is worth bearing in mind when considering combining medication and psychotherapy. The abstract of their paper reads "Patients' attributions of effects of treatment are important, as these can affect long-term outcome.  Most studies so far focused on the influence of attributions to medication for anxiety and depression disorders.  We investigated the effects of patients' attributions made after acute treatment on the long-term outcome of antidepressant medication (ADM) and psychological treatment (behavioural activation, BA) ... Belief in coping efficacy was the only attribution factor significantly predicting 1-year HRSD scores, controlling for condition, post-test HRSD and their interaction.  It also mediated the condition differences at follow-up. Credit to self was the single attribution factor that predicted BDI follow-up scores, controlling for condition, posttest BDI, and their interaction.  It partially mediated the condition differences on the BDI at follow-up. Attribution to increased coping capacities and giving credit to self appear essential.  In the long-term (at 1 year follow-up), the difference in outcome between BA and ADM (with BA being superior to ADM) is at least partially mediated by attributions."

So it looks as though a cost of adding medication to psychotherapy is that the client may then put their improvement down to the medication rather than to any changes they themselves were able to make, or lessons they were able to learn.  This "it was the medication that got me better" belief is likely to increase the risk of relapse in the future, possibly due to leaving the client feeling relatively powerless.  If it's possible for the therapist to honestly show that any improvement made was due, at least in part, to factors other than the medication, then this is likely to be well worth doing.  Again this is a potential benefit of charting client improvement across time - with significant events like starting/stopping medication noted - so that one can have a clearer idea of what benefits medication might or might not have provided - see, for example, the "Progress charts" downloadable from the "Introduction & monitoring" section in "Good knowledge".

The two papers mentioned above, when added to the finding that psychotherapy significantly reduces relapse risk when compared with pharmacotherapy (see, for example, Biesheuvel-Leliefeld et al's 2015 meta-analysis), highlight the value ... if possible ... of trying to initiate treatment (of mood & anxiety disorders) with psychotherapy rather than pharmacotherapy.  Clients mostly prefer psychotherapy anyway - see McHugh et al's 2013 paper "Patient preference for psychological vs pharmacologic treatment of psychiatric disorders: a meta-analytic review".