Do not be too timid and squeamish about your actions. All life is an experiment. The more experiments you make the better. What if they are a little coarse and you may get your coat soiled or torn? What if you do fail, and get fairly rolled in the dirt once or twice? Up again, you shall never be so afraid of a tumble.

Yesterday we had the eleventh of this twelve session "Life skills" evening class.  It's five weeks since the tenth meeting and there's another eleven weeks until the twelfth.  As usual we began with an Autogenic practice.  Especially now, when a training group has met on a whole series of occasions, these shared relaxation/meditation practices can be quite "blessed".  I've taught these kinds of skills for over thirty five years.  I have a very strong sense that the depth one goes to in a shared practice is strongly affected by the group itself - how easy and affectionate we feel with each other, how used we are to being around each other, how seriously & deeply others in the group are able to take their practice.  Precious.

There were fewer handouts than usual.  In fact participants just had a reflections/intentions sheet and their usual handout of a dozen slide miniatures covering the material we were to explore.  See slides 1-6, Powerpoint or slides 1-6, PDF and slides 7-12, Powerpoint or slides 7-12, PDF.  After the initial practice, we spent a good deal of time going round looking at how everybody had been doing.  This is another reason for starting the class with a meditation/relaxation practice.  As Barbara Fredrickson has highlighted with her broaden-and-build theory of positive emotions, when we're relaxed, peaceful, feeling good, we tend to think more clearly, remember better, relate better.  The "go-round" is likely to be more helpful for everybody, after an Autogenic practice session rather than before it.

A couple of people had been through particularly difficult life experiences in the five weeks since the previous session.  We talked about this.  I said that the Life Skills (and knowledge) we've been developing are probably relevant in these crisis situations in at least three ways.  I used the metaphor of taking a ship into a storm to illustrate this.  So the first way the skills are relevant relates to what shape we're in as we go into the crisis - how seaworthy, how well looked after, how skilful the ship and crew are as they sail into the storm.  The second way the skills are relevant is in how one copes in the storm, the crisis itself.  Just as at sea, one may no longer be able to use many of the sails in the high winds, so we may find that our coping skills as well are strongly challenged.  One person explained that they had been so pressured that - for a few days - it was hard to eat, and certainly very hard to sit to meditate.  They had found however that they could keep taking physical exercise, that friendships continued to be a real source of support, and that they could do brief snatches of the Autogenic relaxation/mindfulness exercises.  They also said that the whole experience of being in the "storm" was less overwhelming than it had been in the past, that they had more belief that they would come through it, that it would pass.  We talked about this, and I queried also the potential value of therapeutic writing, of reappraisal methods, and of problem solving in these very difficult situations.  The third way the life skills are very relevant is in recovering after the storm, after the worst of the crisis is past.  The boat needs damage repaired, mast re-fitting, sails mending.  Many people lose their life skills practices because they're not good at getting back on track after an injury, or an illness, or a life change.  Picking up one's physical exercise, healthy eating, Autogenic & Goodwill practice, relationship involvement, and so on, is so important.  Good to do.  If ships leave harbour they are likely sometimes to encounter storms ... just as they'll probably encounter long periods of beautiful weather.  To be a good sailor is to be prepared for and able to deal with (or savour & enjoy) both good weather and bad. 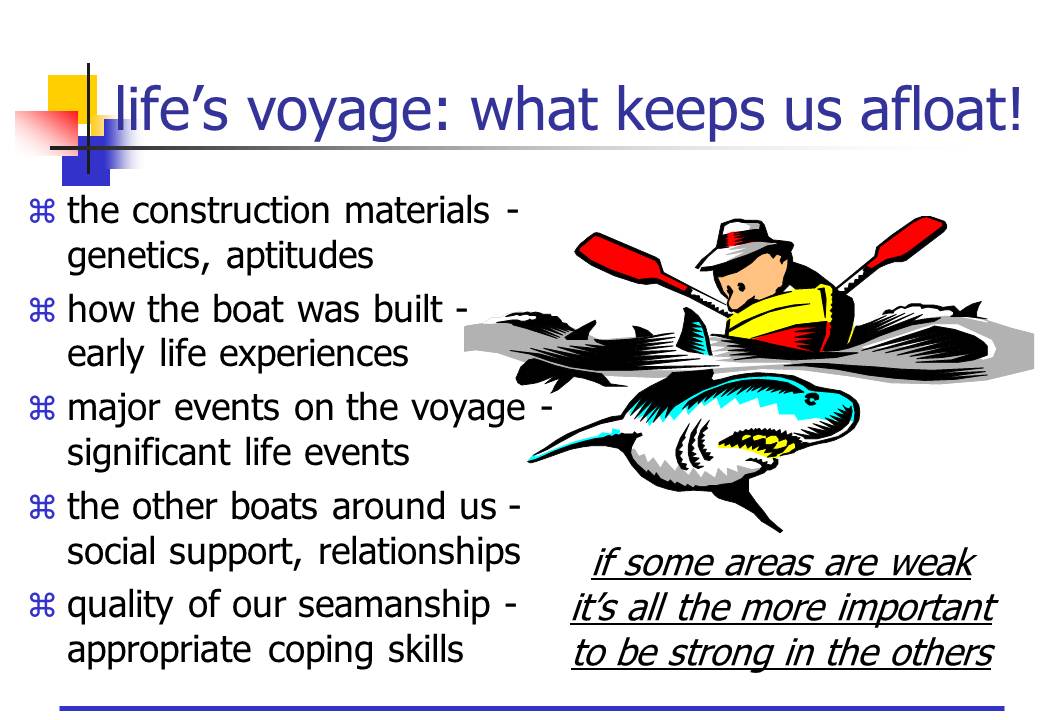 This image is downloadable both as a Powerpoint slide and as a PDF file.

Another issue we revisited in the go-round was the Goodwill practice.  I talked in some detail about this in a blog post about last time's session.  Somebody had been finding that the somewhat Buddhist-derived Goodwill practice just didn't really work for them.  They're a committed Christian and I had encouraged them to come at this more as an intercessory prayer.  They reported back this evening to say how much better this had worked for them.  This led to a discussion about the importance of linking these inner practices to our personal values and beliefs.  I talked about a very traditional elderly minister who came to one of my Autogenic Training classes many years ago.  He was very doubtful about the whole procedure but bravely went through the training.  At the end he generously said "They should teach these kinds of skills in theological college".  I personally am not a member of any particular religious group, although during my lifetime I've spent a fair amount of time in monasteries, ashrams and other retreat centres.  I do however strongly encourage people to adapt their Autogenic/Goodwill practice to link with their personal values & beliefs.  This seems to have so many advantages - including increased long term commitment to maintaining their practice.  For Christians I often recommend looking at Anthony de Mello's book "Sadhana ... Christian Exercises in Eastern Form" and for Buddhists I suggest the series of books by Jack Kornfield.